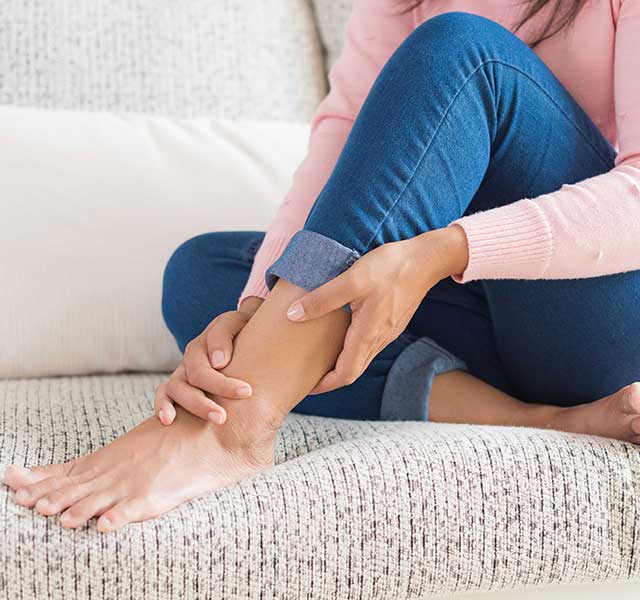 Creeping. Aching. Crawling. Throbbing. If you have Restless Legs Syndrome (RLS), you know these words describe the sensations that make you want to move your legs. Symptoms may seem worse or more noticeable in the evening, after you’ve had a chance to slow down and have fewer distractions. Feelings may intensify after a long car ride or sitting in a movie theater for several hours as well. Getting up to stretch, walk or even jiggle your legs tends to help that unpleasant restless feeling temporarily quiet itself.

It's common for RLS symptoms to fluctuate, feeling less noticeable one day and more intense on other days. For some people, the leg sensations can even seem to vanish for a while, and then return. Symptoms may worsen with age and spread to include the arms. But you do not have to handle RLS on your own. Help is available.

“I recommend starting with your family doctor first. If you are not able to get a confirmed diagnosis, then see a specialist,” says John Wald, M.D., a neurologist with Henry Ford Allegiance Health. “Because Restless Legs Syndrome is classified as both a neurological and a sleep disorder, a neurologist or a sleep specialist will be able to make a diagnosis and recommend a plan for treatment.”

RLS affects approximately ten percent of American adults, according to the National Sleep Foundation, and is twice as common among women as men.

Related Topic: Can 30 More Minutes Of A Day Sleep Make a Difference?

How Restless Legs Syndrome Can Be Treated

When a patient comes to Dr. Wald with symptoms connected to RLS, he begins with a clinical exam to test for iron deficiency.

“Restless Legs Syndrome is very common due to anemia and the natural aging process of the brain,” he says. “Your brain needs dopamine, an important chemical messenger, to function properly. To produce dopamine, your brain needs iron. If you are anemic, it causes a dopamine deficiency.”

Medications to address anemia, as well as dopamine replacement therapy, can help address RLS symptoms. Dr. Wald recommends talking with your doctor or pharmacist about the potential risks and side effects of any medication you are prescribed. For example, if a medication causes drowsiness, it would not be recommended for daytime use. This is especially important to know because RLS can disrupt or make it difficult to get to sleep, resulting in daytime drowsiness. Taken in the evening, the same medication can have the secondary benefit of allowing you to sleep more peacefully while your restless legs take a rest.

To find a doctor near you, visit henryford.com. In the Detroit area, you can also call 1-800-HENRYFORD. If you’re in the Jackson area or south central Michigan, call 1-888-862-DOCS.