In August of 2017, Gill Doyle was experiencing intense and extremely painful headaches. Chalking them up as sinus pressure from fall allergies, he refilled his nasal spray & went on with his life. But then after four days in a row of increasingly painful headaches, on day 4 the pain grew so severe that Gill lost control of his bladder.

Something was terribly wrong.

He immediately called his wife, Jennifer, and headed to the closest ER and described his symptoms. By the time Jennifer arrived at the ER Gill was headed up for a head CT.

Thereafter, the doctors came in and said there was a mass a little larger than the size of a golf ball pressing on his brain.

“They told me not to draw any conclusions,” he said. Easier said than done!

They quickly scheduled an MRI for later that evening.

“The MRI was crazy,” he said, looking back. He remembers thinking ‘Is this cancer? Am I going to be dying soon?’

The oncologist on-call confirmed the worst — and described the seriousness of the prognosis: Grade 4 brain cancer: Glioblastoma.

In 2017, 48-year-old Doyle was diagnosed with Glioblastoma (GBM). Having had 23 years of experience in the pharmaceutical field, the last 9 of which were in oncology, Gill knew the reputation of hospitals in Michigan and had relationships with top medical oncologists. Now came one of the most important decisions in life: where to seek care. He asked numerous oncologists where he should seek care for his brain tumor and one program continued to raise to the top: Henry Ford. The choice was now simple: He chose the Henry Ford Hermelin Brain Tumor Center for his brain surgery and subsequent treatment.

“That’s the hospital you want to go to if you have brain cancer,” he quotes. “They do more recruiting for brain tumor clinical trials, and they’re a leader in brain cancer research and treatment,” Gill explains.

Through networking and online research Gill narrowed it down to a few neurosurgeons but landed confidently on Jason Schwalb, M.D.

“I created a hand-made card for my surgeon,” said Gill. “The card read: Because you gave me a GTR, here is your GTR! I gave it to him with a Nissan GT-R model car,” he explained, still laughing at his punny gesture.

Gill understood it takes a team to defeat this aggressive disease. He researched Tobias Walbert, M.D., a Neuro-Oncologist at the Henry Ford Hermelin Brain Tumor Center, and was "psyched" to have him as his doctor. Vijayalakshmi Donthireddy, M.D., came on board as his medical oncologist and Salim Siddiqui, M.D., led the radiation treatment.

“I have nothing but great things to say about everyone I’ve encountered at Henry Ford,” he said. “I was really happy with my entire team of physicians, nurses, & M.A.s,” he adds.

Gill started out with what is considered the standard treatment for GBM, which consists of chemotherapy and radiation conjunctively for 6 weeks. The treatment made him really tired but after some healing Gill started with maintenance chemo and they introduced the FDA-approved Tumor Treating Fields.

Henry Ford Cancer Institute is one of the few cancer programs in Southeast Michigan fighting the most common and deadliest brain cancer with Tumor Treating Fields, a low-intensity alternating electric field applied with a wearable device that stops or slows the growth of tumor cells in patients with newly-diagnosed glioblastoma. The FDA-approved Optune® device generates electronic tumor-treating fields — a unique approach that garners hope for patients afflicted with this deadly cancer. For GBM patient Gill Doyle, the device has become a focal point for optimism.

“We are focusing on the newest, cutting-edge science and bringing the technology along with precision medicine to patients like Gill,” says Dr. Walbert.

Previous research has shown that the combination of surgery, chemotherapy (temozolomide) and radiation can give patients only a 5 – 10 percent chance of survival after five years. Until recently, there have been few additional treatments for the disease.

“This is a complex and aggressive tumor,” says Dr. Walbert. “We have to keep an open mind and try new treatments and approaches.”

Patients must wear the device at least 75 percent of the time. The device is attached to a nearly three-pound battery pack which can be carried in a backpack over the shoulder, or plugged into an electrical outlet. Every two-three days, the head has to be shaved. “That can be very challenging, especially for female patients,” says Dr. Walbert. “Patient participation and family support are big factors for treatment success.”

“I’m a numbers guy,” says Gill. “Last November there was a retrospective look at patients on the trial and those who had higher compliance lived longer. Those who followed standard of care and wore the device 90 percent or more had a 29 percent 5-year survival, compared to just 5 percent who followed standard care alone! “For the year I’ve been wearing the device, my compliance has been 96 percent, and I’m on my way to 97 percent,” says Doyle. 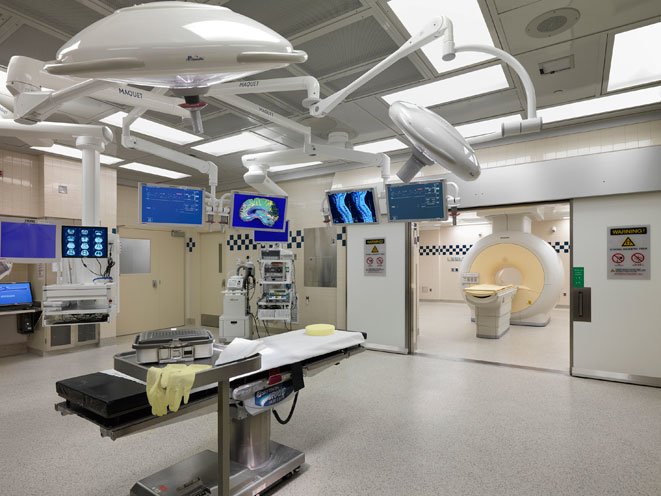 Gill’s surgical team was able to perform a gross total resection of his tumor. Interaoperative MRI helped distinguish between the tumor and healthy brain tissue, and confirmed that all of the imaged tumor has been removed. 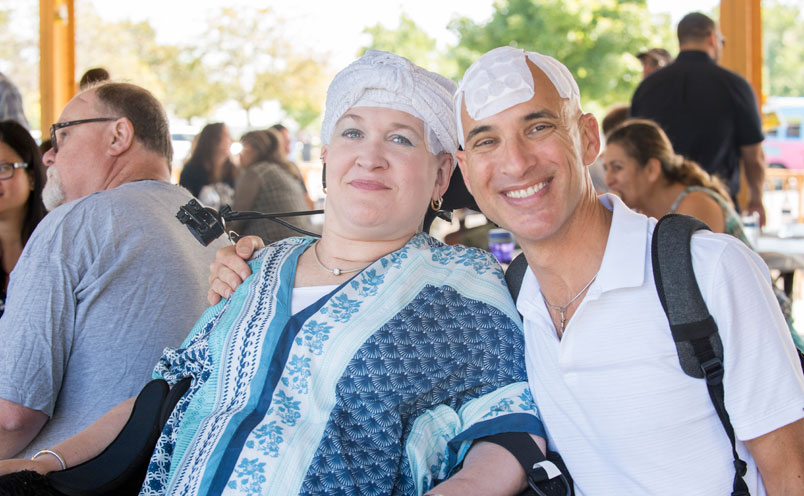 Living life with a brain tumor

Thirteen weeks after surgery Gill was cleared to go back to work. He has been back to work ever since and was happy to get back to regular activities, which includes running and physical fitness, golf, attending his kids sporting events and routine travel for his job.

“Last year I flew 122 times for work,” exclaims Gill. “I have had so much love and support from friends and family. Life has been fantastic.” 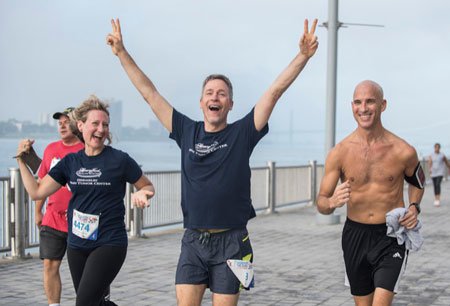 In September 2018, Doyle ran alongside his daughter and Dr. Walbert in the 5K Head for the Cure race in Detroit. The previous year, the race took place only 3 weeks after his surgery so he wasn’t medically cleared to run. He walked that 5K with one of his 3 sons.

“His ability to adapt and embrace the treatment has certainly made a big difference,” says Dr. Walbert.

Gill receives an MRI scan every eight weeks; and at this time, he is not completely free of cancer. He jokes that he has to keep going — tuition payments are due each month at two colleges, high school, and elementary school for his four kids. To encourage other GBM patients using the device, Doyle acts as an Ambassador for the device manufacturer in addition to serving as a mentor to brain tumor patients through Imerman Angels.