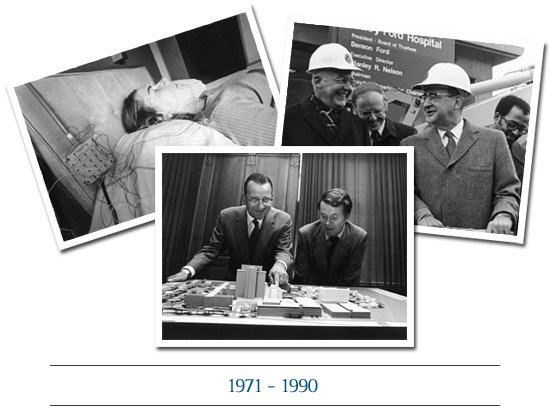 In 1971, Stanley Nelson, who had been hospital administrator at Abbott-Northwestern Hospitals in Minneapolis, accepted the position of the hospital’s new executive director. On Nelson's arrival in Detroit, many problems faced the hospital, in terms of physical facilities, patient base and patient care delivery systems, as well as human resources issues for physicians and nursing staff. Over the next 17 years Nelson, with unique energy and vision, would direct a turnaround and lead the hospital through a period of monumental transformation, establishing it once again as a pioneer among healthcare institutions in the United States.

In the summer of 1971, the hospital renewed its commitment to the city of Detroit with its extension of services to the Community Health and Social Services Center (CHASS) in partnership with the City Health Department and the Michigan State Department of Social Services. The CHASS clinic, located on West Vernor in a Spanish-speaking neighborhood, provided free health services to non-English speaking, low-income families in Detroit's inner city. A similar clinic, the Cabrini Clinic, has served inner-city patients of Detroit's Corktown neighborhood since the 1950s with Henry Ford physicians volunteering their time.

Nevertheless, in the 1970s the hospital's leadership recognized changes in the demographics of the city and its patient base. The concept of "branches" or satellite clinics, which had been suggested earlier, had been discussed with increasing seriousness. Almost half of inpatients, as well as outpatients, seeking service at the hospital were coming from outside of Detroit, with about 40 percent coming from the seven counties surrounding the city. It was clear that additional care facilities could succeed in the suburban areas, and the hospital began to develop proposals for expansion into those communities.

The need for space for computer operations also had become acute, and a building was purchased in Troy to house it. The 60,000-square-foot building on Big Beaver Road was large enough to provide facilities for clinical activities, as well as the information systems operations. On its opening in the spring of 1973, the hospital initiated its first satellite center, offering renal dialysis services and outpatient psychiatric care.

In October 1973, Benson Ford announced the Ford Foundation's gift of $100 million to the hospital. The gift was given in two parts - $25 million in cash, and $75 million as an annuity which would payout $7.5 million per year over the following ten years. This grant would make possible the construction of a long-needed and planned education and research building as well as a decade-long program of growth and development. A Development Office was established immediately after the gift was announced. Initially, the goal of the Development Office was to raise $200 million from private and corporate sources to support the program of growth, optimistically called "The Decade of Development."

After receipt of the grant, the hospital also was able to move forward with the satellite concept more aggressively. Plans were developed for the construction of outpatient ambulatory care facilities in Dearborn and West Bloomfield. The Ford Land Development Company presented a gift of land to the hospital. The 21-acre site, along Hubbard Drive near the Southfield Freeway, was adjacent to the huge new Fairlane Center shopping mall, which was then under construction. In West Bloomfield, the hospital purchased an 80-acre parcel of land along West Maple Road between Halsted and Drake Roads. Construction began on both facilities in 1974.

During the late '70s, Ford Motor Company commissioned Kaiser Permanente, the nation's largest, most successful HMO based in California, to study how HMOs could best serve the Detroit market. The Kaiser study indicated that a reorganized healthcare program able to inspire community support could offer a viable alternative to traditional healthcare as well as considerable savings in premium dollars and out-of-pocket costs. Based on these findings, negotiations between Henry Ford Hospital, Metropolitan Hospital and Health Centers, and Metro Health Plan, Inc. (which was formerly known as the Community Health Alliance) resulted in a new alliance-- Health Alliance Plan (HAP), the name given to the newly form healthcare delivery system in 1979.

The addition of the HAP HMO to the hospital's programs, in synergy with the new centers, helped to increase the patient base. Medical record number 2,000,000 was assigned in late 1979 to a new HAP member who visited the Fairlane Center for a physical examination.

By the end of the decade and throughout the 1980s, more radical change had occurred at Henry Ford Hospital than had marked all of its past history.

By 1988, Stanley R. Nelson had been at the helm of the Henry Ford Hospital for 17 years and was ready to retire. He led the search for a successor himself, and focused on aspirants who excelled in the leadership of integrated health systems. Gail L. Warden, a highly respected healthcare administrator at Group Health Cooperative of Puget Sound in Seattle, the nation's largest cooperative healthcare system, soon became the candidate of choice.

On Warden's arrival in Detroit in 1988, the HFHCC was a far different institution than Henry Ford Hospital had been when Stan Nelson took over. Its financial status was now healthy, with the physical plants sound and growing. It offered a full range of health services. The Board of Trustees was larger and very active. Beyond that, and more importantly, the medical staff was expanding in size and excellence. The challenges he saw involved strengthening academic programs, expanding managed care enrollment, and amplifying the tertiary care focus at the hospital.

During his first year, Warden strengthened relationships with state and local leaders, and initiated efforts to meet the needs of urban patients and to promote minority advancement among employees and staff. In December 1988, the Henry Ford Hospital Affirmative Action Program was launched, initiating formal programs to foster diversity awareness and enhance minority involvement at the hospital.