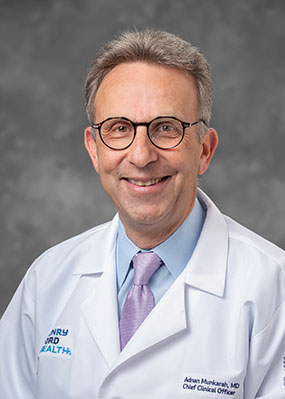 Adnan Munkarah, M.D., is the Executive Vice President and Chief Clinical Officer for Henry Ford Health. Dr. Munkarah is responsible for the complete spectrum of clinical activities across the health system, ensuring comprehensive healthcare delivery, enhancing the quality of care, and patient safety, and exceeding patients’ expectations of the overall care experience. He oversees the development and achievement of strategic goals for clinical service lines, medical staff expansion and engagement including employed and independent providers, and innovative clinical care programs consistent with the overall strategic direction of the health system. Working the system Chief Academic Officer, he ensures the success of the system research and educational enterprise and its alignment with the clinical programs. Additionally, Dr. Munkarah provides supervision for the health system’s population health and accountable care strategies.

Dr. Munkarah is a board-certified gynecologic oncologist with a prolific career as clinician, researcher and educator. He is a professor of Obstetrics and Gynecology at Wayne State University. He has authored more than 165 articles and book chapters. He has served as a visiting professor and invited lecturer at national and international meetings. Among his many honors and awards, Dr. Munkarah has received Patterson Chair in Gynecologic Cancer Research, Best Doctors in America, APGO Excellence in Teaching Award, Clark Kirkman award as Surgical educator, Lebanese Society of Obstetrics and Gynecology International Achievement Award, and repeatedly named one of the Top Doctors by HOUR Detroit Magazine in the area of Gynecology Oncology.

A graduate of the American University of Beirut in Lebanon, Dr. Munkarah received his Doctor of Medicine with Distinction in 1985. He completed residency training in Internal Medicine in 1988 and Obstetrics and Gynecology in 1992 at Wayne State University, and fellowship training in Natural Immunity and Gynecologic Oncology at the University of Texas MD Anderson Cancer Center in 1995.