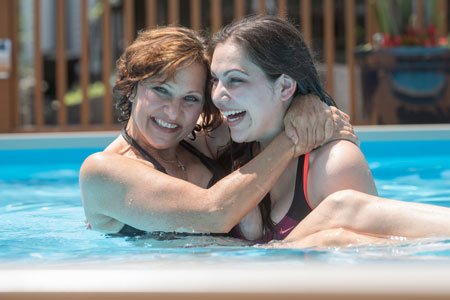 Teaching kids problem-solving skills is a passion for Lynn Walkuski, a Wayne County math, science and social studies teacher. She put those skills to work in a way she never imagined in March 2016.

"I left the gym, and I noticed there was a pulling under my right arm,” recalls Lynn. She lifted weights and did vigorous aerobics almost daily and thought it was probably just a sore muscle.

Her primary care physician suggested checking it when Lynn’s mammogram was scheduled in two months.

At the time of the mammogram, a shadow was found. A 3D mammogram revealed a mass, and on the same day, Lynn had a biopsy.

When her physician called to give her the diagnosis, Lynn was taking care of her sister who had stage 4 renal cancer.

"They called me the next day and said, ‘you tested positive for breast cancer.' Imagine my surprise,” she says.

That was August 31, 2016 – about five months after she first felt something wrong.

Lynn initially saw a surgeon and geneticist. Both suggested that the tumor was a typical, easy-to-treat cancer. Because Lynn was 55 years old at the time, there was less than a one percent chance for the cancer to have genetic component.

Even though Lynn had five cousins with breast cancer, the geneticist used statistics to support the opinion that Lynn’s was not an aggressive cancer.

"I'm a science teacher. What do scientists tell you? They do three trials, right?” she says. “I needed different minds to look at my case. That’s the way I process information. I’m also a prayerful person, and I asked for guidance from God. At the heart level, I knew I needed to get different opinions.”

"Although she presented with an early stage cancer, she had a very significant family history. Our team was highly suspicious that she was likely a genetic mutation carrier,” explains Dr. Bensenhaver.

“Doctors are always busy and rushed,” says Dr. Bensenhaver, “but you always have to listen, so patients feel their current concerns have been addressed and they feel confident about what you’re telling them. Every patient deserves that. If there’s any concern after talking with a physician, find another physician to talk with, even if it’s simply for reassurance.”

“It felt right. It felt peaceful. She explained why she made that choice,” says Lynn.

Genetic testing revealed Lynn had an aggressive form of breast cancer, called triple negative ductal carcinoma, which was caused by a BRCA 1 genetic mutation. If both breasts weren’t removed, another cancer would likely appear.

Within three days, Lynn had the double mastectomy, followed by four months of chemotherapy, surgery to remove her ovaries, and then reconstruction.

Genetic testing for an accurate diagnosis 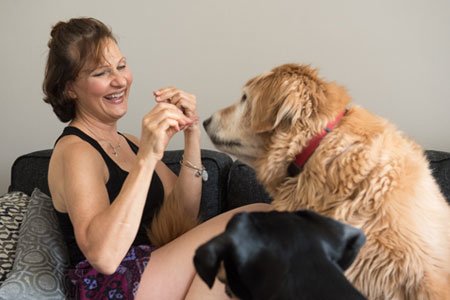 Two weeks after surgery, Lynn received a call from the medical center where her first diagnosis had been made. “We have your test results,” says the geneticist.

“Oh my gosh, you tested positive for BRCA 1. You must have ESP,” says the geneticist.

“No, I have divine guidance and a Henry Ford doctor,” says Lynn.

There was a long silence on the phone.

“Dr. Bensenhaver called it. She is very gifted. She could palpitate the tumor when others couldn’t feel it; she recognized the cells and estimated when it began growing. That turned out to be the time when I began feeling tightness under my arm,” Lynn says.

Lynn went back to teaching six months after she first noticed the pulling sensation under her arm. During winter break, she had one more surgery, a nipple reconstruction. Now she sees her doctors every three months for check-ups.

“I am my old self and better,” says Lynn.