Imagine 1925 Detroit: A 5-year-old boy running around outside enjoying a life full of imagination and adventure in the Motor City. On his wonderous adventure, he jumped off the roof of his house and landed on a rusty nail. His mother picked him up and ran two blocks down the street to Henry Ford Hospital.

Fast forward 20 years to Germany in 1945. The same little boy from Detroit is now a fighter pilot during World War II. He flew 33 missions over France and Germany and became known as the “Berlin kid” for his heroic service.

This person is Mort Harris.

A noted businessman and philanthropist, Mort gave Henry Ford Health a $20 million gift to support its new 187,000 square-foot cancer facility in Detroit. The gift honors the love of his life, his late wife Brigitte, in naming the new facility the Brigitte Harris Cancer Pavilion. It will open January 20, 2021.

Mort was invited by a friend to join a family vacation to India. Meanwhile, Brigitte was invited by that same friend’s wife to join their trip. The two met at dinner the night before their flight and instantly connected.

When Mort and Brigitte met, they were both recently widowed with children. Mort, who lived in Michigan with his three sons, asked Brigitte to travel from Europe to visit him. She accepted his invitation for what was supposed to be a two-week visit; it turned into a lifetime.

Mort and Brigitte married and began a beautiful life together with their blended family in Bloomfield Hills. Mort, the co-founder of American Axle and Manufacturing, and Brigitte, a graceful woman who volunteered her time supporting organizations, including Henry Ford, Wayne State University and served on the Board of Oakland Family Services.

Brigitte also enjoyed playing tennis and golf, entertaining friends, traveling extensively, spending time with her family, and doting on her adoring husband. She found a sense of peace and belonging in her beautiful rose garden, which she pruned and nurtured until her death in July 2016 after a courageous battle with pancreatic cancer. 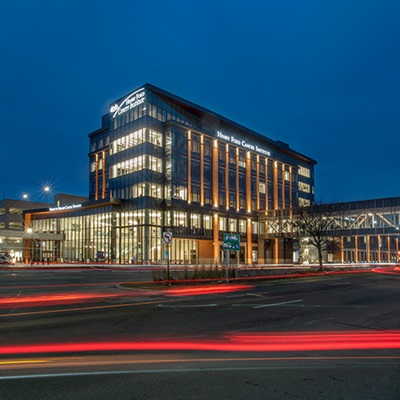 A passion for giving to the community

The couple was passionate about giving back to the community. Mort continues that tradition since Brigitte’s passing, supporting Henry Ford and other local organizations in honor of his late wife.

Now, their love has come full circle with construction of the Brigitte Harris Cancer Pavilion, exactly two blocks from where Mort jumped off the roof of his childhood home.

“Her everyday character, depth, humility and simple grace of her presence will linger forever,” says Mort, who donated $20 million toward the new cancer pavilion.

Make a Gift
Thank you for considering a gift to the Henry Ford Cancer Institute
Give Now
Clinical Trials
Discover hundreds of clinical trials for virtually all types of cancer.
Cancer Support Services