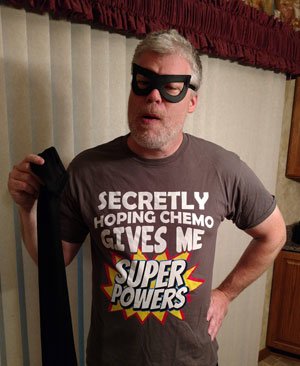 Dan Roth plays with words like a kid plays with toys. Hearing his commercials made people click the remote control or buy something. But the fun stopped when chronic fatigue began.

For three years, medical tests showed nothing. Then declining health and digestive problems started. His doctor ordered a colonoscopy and when Dan woke up from the anesthesia, he told a joke. No one laughed. Instead he heard, “You have cancer.” The tumor in his colon was so large the colonoscopy couldn’t be completed. Although the Henry Ford staff was encouraging, they advised Dan to prepare for all scenarios — just in case.

Telling his family and loved ones about the disease was one thing, but his kids — oh no, that was a different story. “If I was going to die there was a lot I still wanted to tell them, but at the same time I didn't want to add to their anxiety,” says Dan, whose son was 9 and daughter was 11. “I opted to write a story to read if they ever needed me and I wasn’t there. I made the story quirky and funny because I didn’t want them to be sad when they thought of me. I gave it a moral because I wanted them to have direction as they navigated through life.”

During the surgery, Eric Szilagy, M.D., a Henry Ford colorectal surgeon, discovered that cancer had spread to some lymph nodes. Two days after surgery, Dan was functioning normally, but the Stage 3B colon cancer required chemotherapy.

Conflicting advice from family and friends about chemotherapy became infuriating. So Dan harnessed himself to a lifeline: Gazala Khan, M.D., a medical oncologist at Henry Ford Columbus Center. “I talked about everything with my oncologist.”

Dr. Khan explained the survival statistics for patients who receive or decline chemotherapy. Also, his wife Joanne, a math instructor at Oakland Community College, simplified the statistics. He opted for chemotherapy.

But chemotherapy wasn’t a happy experience. “The second it started dropping through the IV, I felt tingling in my fingers and toes.” However, his medical team decided the benefits of chemotherapy still outweighed the side effects.

Drugs designed to kill cancer can damage nerves that affect feeling and movement in the feet and hands, causing tingling and numbness. Known as chemotherapy-induced peripheral neuropathy (CIPN), the side effect is common and often temporary.

By the second chemo treatment, I had lost all feeling in my hands and feet,” says Dan who had been an athletic 6’3”, 45 year old. “Normally, I’m a very easygoing person. Almost overnight, I transformed into a cranky, irritable, emotional and mean person.”

“About this time, my wife had a very blunt conversation with me,” says Dan. “I was so wrapped up in what was happening to me. I lost myself in the treatment. I completely lost sight of how my journey was impacting those closest to me.”

Change happened in a somber infusion room where too many patients had a far-off stare. “I really wanted to have that far-off stare, too,” says Dan. “Instead, I gave the woman next to me the biggest smile I could muster and asked her if she wanted to play hide and seek.” Patients laughed and time flew. “It all started because I was kind.”

During his third treatment, CIPN symptoms increased. “I couldn’t feel my feet on the ground,” says Dan. He used a cane, went to an occupational therapist and tried acupuncture.

Despite the CIPN, Dan focused on the bright side: The drugs were killing cancer cells. “I rediscovered hope and was doing everything I could to spread it. I learned to cope and adjust.”

The culprit drug Oxaliplatin was reduced and then finally removed from his chemotherapy cocktail, says Dr. Khan. “Studies show that Oxaliplatin improves overall survival by 10-15 percent, and greater than 80 percent of patient completely recover their nerve function. There is a really good likelihood that Dan will recover from the neuropathy as he is already showing significant signs of improvement. In addition, Dan has incorporated a rigorous exercise regimen with targeting the affected muscles and building up the opposite muscles. He’s trying his best.”

“The team at Henry Ford were superheroes to me. I cannot speak highly enough of Dr. Szilagy and Dr. Khan. They were honest, caring and incredibly insightful through every phase of my treatment,” says Dan.

His kids’ book? Garganash and His Talking Mustache evolved into a wonderful, witty and rhythmic story about kindness and self-recovery — via the Golden Rule.

Two years ago I was diagnosed with colon cancer. Up until then, my kids had never known a winter without an igloo. This year I fought through my CIPN and restored a family tradition.