It’s natural to have questions if you’ve been diagnosed with gastroesophageal reflux disease (GERD) or if your doctor suspects that you may have this condition. We’ve gathered answers to some of the questions our team commonly receives about GERD.

Do I actually have GERD?

Before we can say that your condition is GERD, we’ll need to consider other possibilities. For example, the following problems can have symptoms similar to GERD:

If your symptoms are severe, your doctor may recommend that you talk to our GERD team. If necessary, we can perform an endoscopy, which uses a thin, flexible tube called an endoscope to evaluate your upper gastrointestinal tract (consisting of the esophagus, the stomach and the first portion of small bowel).

If this is negative, you may need an ultrasound of the abdomen to evaluate the biliary tract. A gastroenterologist may recommend further studies.

How can I manage my GERD symptoms?

You can manage GERD symptoms by using:

There are other measures that you can initiate to reduce the symptoms of GERD:

Is coughing a common symptom of GERD?

Coughing can be a symptom of GERD, but it is not necessarily a common symptom. There may be several reasons for it:

How can I best prepare for a GERD attack?

Symptomatic esophageal reflux is a reoccurring problem. Once the symptoms come back (known as a GERD attack), there is nothing to do but wait for the antacids to stop acid production so that the esophagus can heal. There are lifestyle modifications that can help control these symptoms:

To prevent GERD attacks, you may need prescription-strength doses of H2 blockers or proton-pump inhibitors such as Prevacid or Prilosec. Your doctor may prescribe prokinetic agents, such as Propulsid, to prevent reflux symptoms.

Are there any symptoms of cancer that are not present with ordinary GERD?

Cough is not a usual symptom of GERD. It may be associated with hoarseness or dental problems if it’s caused by GERD. Having a cough does not necessarily imply that you have Barrett’s esophagus or esophageal cancer.

I think I may have esophageal cancer. What’s a good indicator?

Especially if you’re over 45, the following symptoms may be warning signs of esophageal cancer if you have long-term GERD:

What is intestinal metaplasia?

What testing do I need if I think I have significant gastrointestinal bleeding?

You should have a rectal examination to test for microscopic blood in your stool, especially if you use more than one adult-strength aspirin a day on a regular basis (or nonsteroidal anti-inflammatory drugs, such as Advil, Motrin, Aleve, etc.). Aspirin products can cause irritation of the stomach lining and even ulcers that can result in bleeding.

What are the long-term effects of using PPIs?

Proton-pump inhibitors (PPIs) include omeprazole (Prilosec) and lansoprazole (Prevacid). When first introduced, Prilosec was only approved for short periods because of the possibility of developing rare stomach tumors called carcinoids due to prolonged suppression of stomach acid.

However, Prilosec has since been used in Europe on patients with ulcers and GERD for several years at a time without adverse effects. Therefore, doctors in the United States currently prescribe it for prolonged periods.

In clinical practice, we try to use the lowest dose of Prilosec or Prevacid necessary to control symptoms and try to wean patients off the drugs whenever possible. On the other hand, we will prescribe these medications for longer periods if necessary.

When should I consider surgery?

If Prevacid doesn’t relieve your symptoms, you may want to consider surgery. You should undergo further testing prior to surgery to confirm the diagnosis of GERD and to rule out other esophageal motility (swallowing) disorders. You should also be aware that any surgical procedure has associated risks. It is important to consider the risks, benefits and alternatives of any procedure prior to proceeding with surgery.

What is the long-term prognosis with reflux esophagitis?

Reflux esophagitis (inflammation of the esophagus due to acid entering the esophagus) is a chronic condition. The severity of symptoms can vary, but most people will have intermittent discomfort or ongoing problems. It is unusual to have only one episode of symptoms.

If you have any other questions or concerns, please consult one of our gastroenterologists. 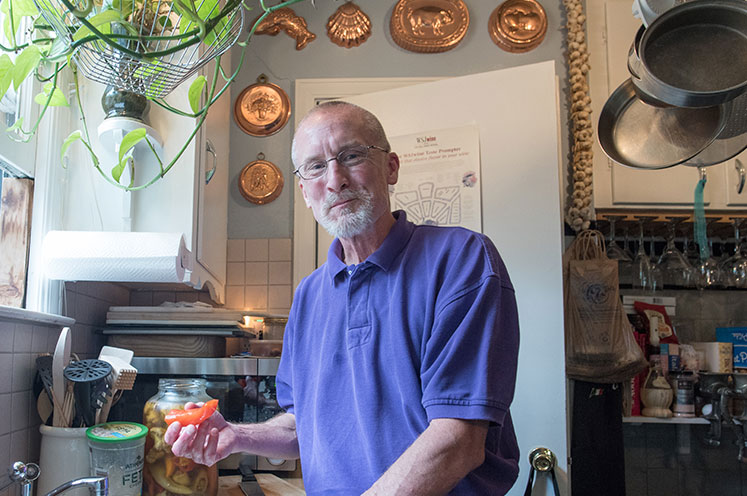 After a new GERD treatment, Eric is ‘back to eating whatever I want’.

Learn More
Take the next step