On a Roll After Robotic Assisted Full Knee Replacement 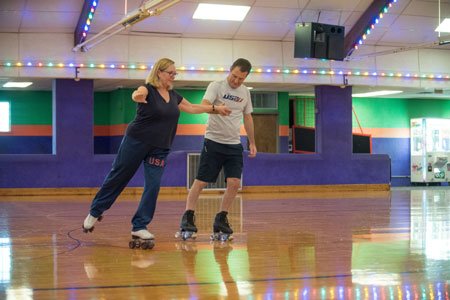 “It feels good to be rolling again!” said Lawaun Modrich, who was back up on roller skates just nine weeks after robotic assisted full knee replacement surgery at Henry Ford Macomb Hospital. Lawaun, a 60-year old Warren resident, has been a roller-skating coach and instructor for 40 years, and was a competitive skater for 13 years.

First in Michigan to use the new ROSA technology

“The new technology lets me personalize the surgical plan based on the patient’s individual bone and soft tissue anatomy. During surgery, it provides real time data so that I can make any needed adjustments,” said Dr. Scott. “The robot takes out variables that we could not measure in the past. There’s no guess work anymore. It’s all about precision.”

Whether robotic surgery results in better outcomes, pain relief, recovery and patient satisfaction is unproven currently, absent long-term clinical studies comparing robotic surgery to the traditional approach. However, the hope is that improved accuracy will result in greater longevity.

Lawaun began seeing Dr. Scott in 2003 for a torn ACL that also required surgery and has been his patient ever since. She found out through X-rays that she has abnormal anatomy that allows her knee cap to slide to the left. They had discussed the inevitability of knee replacement surgery for several years. She did physical therapy, cortisone shots and gel injections for relief, but the last 18 months, she felt constant pain and finally agreed that total knee replacement was the way to go.

She went in for her surgery at Henry Ford Macomb on a Tuesday and was discharged on Thursday.

“I’m so grateful to everyone at the hospital who dealt with me. They were phenomenal. They paid attention to my needs. They listened and worked with me to make sure I was as comfortable as possible,” said Lawaun. “And the inpatient physical therapy unit was awesome.”

“I’m pleased with the progress of my knee and I look forward to seeing what I can do,” said Lawaun.

Getting back to what she loves 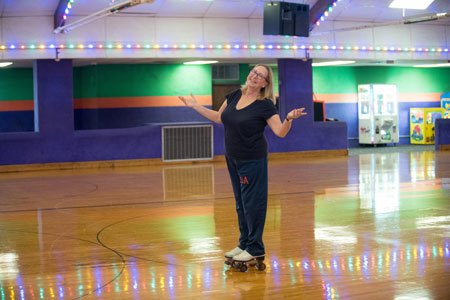 She explained that roller skating in general is one of the best forms of exercise, next to swimming, because it uses so many muscles and is low impact, unless you’re performing jumps. She plans to return to coaching for as long as she can.

“My parents met in a roller rink and our family basically grew up on skates,” shared Lawaun. “The first time I was on skates, I was 18 months old. I cried when my mother put them on and again when she took them off!”

On getting back up on skates, she said, “It was a little scary and I was a little nervous. But rolling again was like being home.”