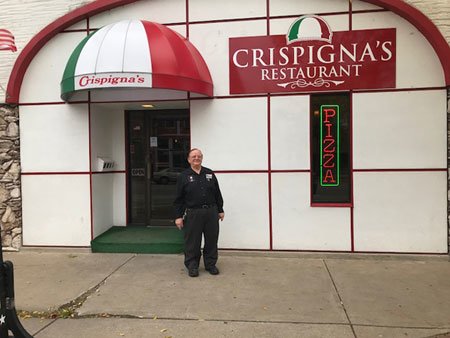 When most people are about to undergo kidney surgery, they get a little nervous. Not Joe Crispigna. Just before the 72-year-old Escanaba resident received anesthesia to remove a potentially cancerous tumor, he was cracking jokes.

“If anybody in this room was out partying last night, I want you out of here,” he announced to his surgery team.

Crispigna, now 74, found that he had a tumor in his kidney in 2016 when he saw his local urologist for problems urinating. His evaluation included a CAT Scan, which revealed a mass on his left kidney that was suspicious for cancer.

Despite being a long-term patient of the Mayo Clinic, Crispigna received a referral for treatment at Henry Ford from Dr. Michael Harris — a urologist at OSF St. Francis Hospital and Medical Group in Escanaba and former Henry Ford staff member.

A few weeks after the tumor was identified, Crispigna and a friend drove 450 miles to Detroit. There, Craig Rogers, M.D., a specialist in robotic surgery for kidney cancer, removed the tumor from Joe’s kidney in a cutting-edge, minimally invasive procedure known as a robotic partial nephrectomy surgery.

“Joe was a perfect fit for the procedure,” Dr. Rogers says. “He had some medical issues that would’ve made open surgery a bigger deal for him with a higher risk of complications. The robot allows us greater precision to remove the tumor and sew the kidney back together and greater efficiency to minimize the time the blood flow is bypassed away from the kidney during the procedure.”

Of course, for Crispigna, the robot simply provided another chance to showcase his humor.

“When they took the sheet off of the machine, I couldn’t resist,” Crispigna says. “I said, ‘If I didn’t know any better I’d think I was on the Starship Enterprise and R2-D2 was about to operate on me.”

After the surgery, Crispigna spent the next few days recovering in the Henry Ford apartments on campus at Henry Ford Hospital, where, he says, he was grateful to receive such a warm welcome.

“From the staff to the folks in the cafeteria to the people who came in and cleaned my room, it was an unbelievable experience,” Crispigna says.

About a week after his surgery, Dr. Rogers called Crispigna with the results from his nephrectomy and delivered the good news that he was cancer free.

“When I heard his voice, I already knew,” Crispigna says.

Fortunately for Joe — and the prompt action he took after discovering the tumor — his successful surgery allowed him to avoid a more invasive open procedure or removal of the kidney. For many, however, that’s not the case. According to the National Cancer Institute, kidney cancer is the eighth most common cancer and the twelfth leading cause of cancer death in the U.S.

To date, Crispigna remains cancer free and, along with his wife, Ann, continues to operate Crispigna Restaurant in Escanaba — a local Italian favorite since 1972.

Thanks to Joe’s experience at Henry Ford, Dr. Rogers and Dr. Harris have since teamed up to offer telemedicine visits so patients in Escanaba and beyond can receive their initial consultation closer to home before traveling to Detroit for surgery.

Henry Ford now offers telemedicine consultations routinely for people like Joe who live far afield from metro Detroit. And while distance may be a deterrent for some prospective Henry Ford patients, Crispigna highly encourages his fellow Yooper’s to consider treatment down state — digitally or in person.

“I couldn’t have received better care anywhere in the country,” Crispigna says. “I truly believe that.”