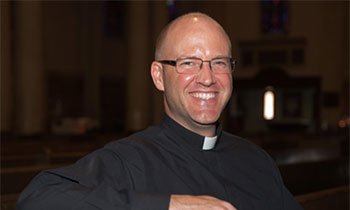 Father Mark Wendling calls it providence. Last October, he injured his right wrist—a minor injury he’s thankful for, because it was the reason he finally got to the bottom of a 28-year-old injury in his dominant left wrist.

It’s not exactly a coincidence that Father Mark has managed to injure both wrists. He has been an avid tennis player since he was a boy, growing up in Canada.

“I have three sisters, so tennis was something special that I did with my dad,” says the 48-year-old, who now lives in Southwest Detroit. “Then I became successful at it. Throughout high school, I was ranked in the top 25 in Canada for my age group. I like that it’s a solo sport, it’s all on you. I like the different strategies involved.”

While Father Mark no longer plays competitively, that doesn’t mean he’s stopped playing altogether—which is how that providential injury occurred. He was running backward while playing tennis and tripped over his feet, putting his hands behind him to break the fall.

A Fractured Wrist Gets Father Mark To The Doctor

Father Mark went to Henry Ford Orthopedic Walk-in Clinic in Novi, where a physician assistant told him that his right wrist was fractured and would heal with a brace. The physician assistant recommended that Father Mark get it checked out in four weeks with Dr. Charles Day, M.D., orthopedic surgeon, who specializes in hand and wrist care.

A month later, Dr. Day X-rayed Father Mark’s right wrist and found it was healing slowly, so he mentioned the possible need for surgery. “That’s when I chimed in,” says Father Mark. “I said, ‘do what you need to do, but be careful with my right wrist because I already have problems with my left wrist.’”

And with that, Father Mark rolled up his sleeve to show Dr. Day his left wrist, which was so swollen that it looked like there was a ball sitting on top of it. Looking on with incredulity, Dr. Day asked how he had injured it. 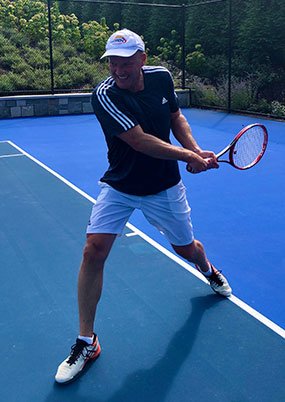 When he was 20 years old, Father Mark hurt his left wrist while playing tennis. He took six months off but his wrist didn’t heal. “I played through it,” he says. “I learned to work around my injury. Like many people, I learned to work with little idiosyncrasies in my body.”

Fast forward to 2013. While washing his car, Father Mark irritated that pesky wrist again—and that’s when it swelled to the size of a ping-pong ball. For the next seven years, that swollen-like ball stayed there. At one point, he saw a hand surgeon who wasn’t able to help.

“I continued to ‘baby’ my wrist,” Father Mark says. “I modified my swings in tennis. Getting dishes out of the cupboard was difficult. If I held groceries the wrong way, it hurt. It hurt while moving the big Bible around for Mass. Some days I would wake up and my wrist was angry and I didn’t even know what I did to it.”

Dr. Day found that Father Mark had extensive chronic ligament damage with significant scarring that lead to a misalignment of his wrist joint. Because his wrist had gone unaddressed for so long, Dr. Day would need to perform a complex surgery to remove the extensive inflamed scar tissues around his wrist joint, realign the wrist joint back to its correct position (which got rid of the “ball” on his wrist), then reconstruct his ligament around the well-positioned joint. (The extensive scar tissue was evidence of his body trying to heal itself over and over again for 28 years, says Dr. Day.)

“I was blown away that Dr. Day took the time to figure out what was wrong with my left wrist, when that wasn’t even the issue I came to him for,” says Father Mark. “He could’ve had me in and out of his office in ten minutes, but he took the time to talk to me. He said ‘you’re my patient, you’re in front of me right now, and I’m going to figure out what the problem is.’ I was floored and so grateful. I had heard he was one of the best orthopedic surgeons in the area, and it’s true.”

The surgery was two-and-a-half hours long. After that, Father Mark wore a cast for six weeks and then went to physical therapy for several weeks. Now, he says he can do everything he couldn’t do before—and is practically pain free.

When Father Mark hit the court for the first time after surgery, he almost immediately felt his swing change. “I hit a backhand and it didn’t hurt,” he says. “Then I hit another one and it still didn’t hurt. I felt my style revert back to how I played when I was 20 years old. It’s like my brain said, ‘this doesn’t hurt anymore, so we can open up those old neuropathways and go back to the old way of hitting.’ My whole game changed. It was such a big deal, especially because tennis is such a big part of my life.”

As for Dr. Day, he is thrilled that he was able to help Father Mark after so many years. “The procedure I performed for Father Mark is not typically done by most orthopedic and hand surgeons,” says Dr. Day. “And many times, patients end up not addressing problems because they saw a physician who told them nothing could be done. But just because one doctor says that doesn’t mean another doctor can’t help. That’s why it’s so important to get second and third opinions. And if you have had a disabling injury in your hand or wrist, you should see a specialist about it, even if the injury was decades ago!”

Oh, and if you’re wondering, that right wrist—the one that Father Mark originally came to Dr. Day for—healed on its own with a thumb spica splint. Game, set, match. 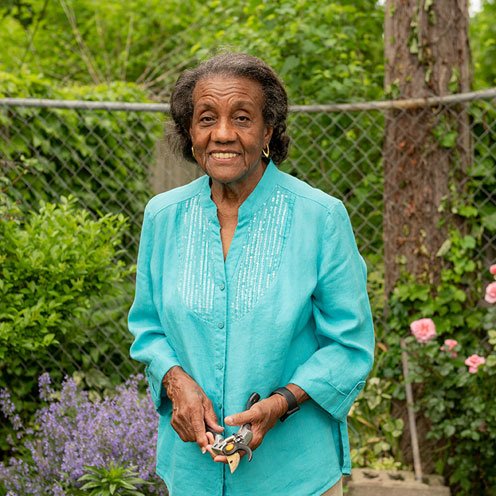 Stephanie underwent double hand surgery to overcome her carpal tunnel to get back to her prized garden.
Read Stephanie's Story
Expert Hand and Wrist Care
Virtual appointments are available.
Request an Appointment
X