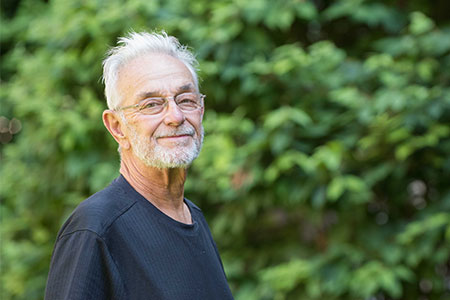 Frank Hribar is what some would call a “tough” guy. His diagnosis with polycystic kidney disease came as no surprise, as it’s been in his family for generations. When retirement from Ford Motor Company came, Frank lasted nine months before accepting a position training welders at the UAW/Ford Training Center in Lincoln Park. When Frank’s nephrologist told him he’d have to go on dialysis because his kidney function was down to nine percent, he scheduled his dialysis sessions, signed up for the transplant waiting list, and got right back to work, training another generation of welders to do the job he’d loved since he was 18.

It was another day at the training center for Frank when wife Sharon walked in.  “She was in tears, and I knew something must be wrong because she never comes to the training center.” Frank recalled.  “She found me and said, ‘You’ve got to go right now. They’ve got a kidney for you!” Frank went straight to dialysis, and then on to Henry Ford Hospital.

“From that moment, Henry Ford has been a blessing,” Sharon shared. “As soon as we arrived here, I felt like our family grew. After surgery the staff on the floor was telling me to relax, he’s going to be fine – and they made sure he was.  They’re always following up, always checking on him. It’s nice to have a community that puts a hand on your shoulder or gives you a hug, and says, ‘We’re going to try hard, and things will be okay.’ It meant a lot to have someone who knows what to expect down the road say, ‘We’re here for you.’  And they are, any time of day. If I have a question, I make a phone call and I get an answer - Almost immediately!”

Frank is back at the Ford/UAW training center, working with youth, veterans and others considering or attempting the launch of a new career. He credits his supervisors with being exceptionally kind and understanding as he went through dialysis and the transplant process.

At 71, kidney transplant recipient Frank Hribar shows no signs of slowing down.  When he does finally end his career with UAW/Ford, Frank has a plan, “I want to become a volunteer patient advocate at the Henry Ford Transplant Institute – Try to give back a little of what’s been given to me.”

Speak with a Transplant Institute specialist.