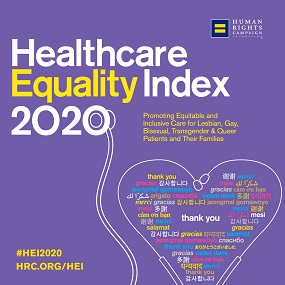 DETROIT – Henry Ford Health System has been recognized as an “LGTBQ Healthcare Equality Leader” by the Human Rights Campaign Foundation (HRC) for its commitment to providing equitable and inclusive care and support for lesbian, gay, bisexual, transgender and questioning patients and employees.

Henry Ford is one of only two health systems in Michigan recognized as a destination for LGBTQ care, employment and community partnerships.

The HRC designation was awarded based on the Healthcare Equality Index (HEI), the national LGBTQ benchmarking tool that evaluates healthcare facilities' policies and practices related to the equity and inclusion of LGBTQ patients, visitors and employees.

“We are incredibly proud of the dedication of our many teams that provide the best care for everyone in our LGBTQ communities,” says Kimberlydawn Wisdom, M.D., Henry Ford’s senior vice president of Community Health & Equity and Chief Wellness & Diversity Officer. “We are honored to be recognized for our unwavering commitment to steadily drive healthcare equity across all the diverse communities that we serve.”

Inclusion on the list is based on participating healthcare facilities recognizing the importance of implementing LGBTQ-inclusive practices alongside their foundational non-discrimination policies.

Henry Ford’s LGBT-supportive policies are numerous and include:

“Henry Ford hospitals have been recognized since 2013 for fostering practices of inclusivity and 2020 was the most significant year to continue their efforts to highlight that commitment,” says HRC president Alfonso David. “We extend our deepest gratitude to these facilities for their commitment to address racism and injustice while courageously fighting against COVID-19.”

The HRC envisions a world where every member of the LGBTQ family has the freedom to live their truth without fear, and with equality under the law.

In a video message accepting the honoree recognition, Henry Ford President and CEO Wright Lassiter III pledged that the health system will continue to enhance its steadfast commitment to provide equitable access to high quality care to all that we serve.

The AHA highlighted Henry Ford’s “We Ask Because We Care” campaign that collects racial, ethnicity and language preference information from patients and is used to reduce health disparities and improve health outcomes in maternal and infant health, diabetes management and prevention and other areas. The organization was also recognized for diversity among its top leadership. The health system’s senior leadership is currently 50% female and 43% non-white.

This is the third time in six years that Henry Ford has been recognized by the AHA for its efforts to address disparities in healthcare. Henry Ford was the recipient of the Equity of Care Award in 2015 and was an honoree in 2014. In 2019, the ECA award was renamed the Carolyn Boone Lewis Equity of Care Award in honor of the first African American to chair the AHA board of trustees.

Henry Ford is also one of the region’s major academic medical centers, receiving more than $90 million in annual research funding and remaining Michigan’s fourth largest NIH-funded institution. Also, an active participant in medical education and training, the health system has trained nearly 40% of physicians currently practicing in the state and also provides education and training for other health professionals including nurses, pharmacists, radiology and respiratory technicians.