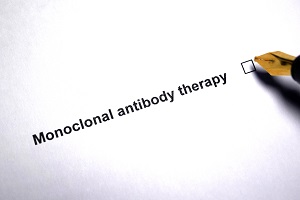 DETROIT (April 15, 2021) – Henry Ford Health System announced today, in partnership with the U.S. Department of Health and Human Services (HHS), that it is boosting access to monoclonal antibody therapy in southeast Michigan, a promising treatment that has been shown to keep high-risk COVID-19 patients out of the hospital.

If administered within 10 days of the onset of symptoms after a positive COVID-19 test, the one-time therapy is effective in neutralizing the virus and preventing symptoms from worsening. The treatment is administered intravenously through a vein.

With the support of HHS, Henry Ford is opening a new monoclonal antibody (mAb) infusion center in southwest Detroit and expanding mAB therapy services at three of its hospitals that care for patients in underserved communities – Henry Ford Hospital in Detroit, Henry Ford Macomb Hospital in Clinton Township and Henry Ford Allegiance Health in Jackson. HHS is also providing support to staff and equip the infusion center expansions.

“We are very grateful for the support of the Department of Health and Human Services and to be part of this national community outreach initiative at such a critical juncture in the pandemic,” said Bob Riney, Henry Ford’s President of Healthcare Operations and Chief Operating Officer. “If we can maximize our community outreach efforts and drive referrals to these sites, we could really make an impact on bringing this pandemic under control.”

On March 17, 2021, HHS announced it was investing $150 million to increase access to mAb therapy in underserved and high-risk communities across the country. HHS, with support from KPMG LLP, is developing new prototype models for expanding access to mAb treatment and leveraging an existing network of healthcare partners that have the experience and equipment necessary to provide the therapy. Other U.S. geographic areas being eyed by HHS are Maryland, New Jersey, San Diego and Houston.

mAb therapy is the first treatment developed specifically for COVID-19 to be granted emergency use authorization by the U.S. Food and Drug Administration. Last month, a Phase 3 clinical trial showed that an antibody cocktail reduced the risk of hospitalization or death by 70% in patients who received the drug intravenously compared to those who received a placebo. The data also showed the drug’s effectiveness against multiple COVID-19 variants including the B.1.1.7 strain that is the dominate one circulating in Michigan.

Monoclonal antibodies are laboratory-produced molecules engineered to serve as substitute antibodies that can restore, enhance or mimic the body’s immune system and target specific attacks by viruses or cancer. The outpatient treatment is only for patients ages 12 years and older with mild to moderate COVID-19 and who are at high risk for progressing to severe disease and/or hospitalization. An infusion treatment takes about one hour to complete.

“With the virus surging in Michigan, and until we get more people vaccinated, monoclonal antibody therapy can prevent people from developing severe disease and from being hospitalized,” Dr. Munkarah said. “This could be a real game-changer for Michigan.”

Bruce Muma, M.D., CEO of the Henry Ford Physician Network who is leading the expansion of the mAb initiative for Henry Ford with Jane Thornhill, Vice President of Business Operations for the HFPN, said provider referrals are key to getting patients access to the therapy. The new sites have a combined capacity to treat 100 patients a day. All referrals will be screened by phone and patients will receive an appointment for infusion at one of the four expansion sites.

“As awareness increases, we expect demand will grow. We are ready to rapidly add capacity and provide additional access and availability to all who need this effective treatment. These new infusion sites are intended to serve the needs of the entire community in partnership with health care organizations across Southeast Michigan,” Dr. Muma said.

The infusion centers at CHASS, Henry Ford Hospital, Henry Ford Macomb Hospital and Henry Ford Allegiance Health will be open from 8 a.m. – 5 p.m. Monday – Sunday. The first treatments will get under way today at the three hospitals. The CHASS site will begin treating patients on April 20.

Patients are required to have a positive COVID-19 PCR test, meet certain eligibility criteria and receive a referral from a physician before they can be approved for mAb treatment.