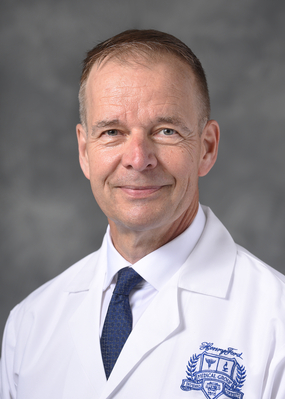 DETROIT (Aug. 16, 2021) – Tom Mikkelsen, M.D., medical director of the Precision Medicine Program and Clinical Trials Office at Henry Ford Health System, has been recognized as a “World Expert” by Expertscape, an online resource for healthcare professionals and consumers that identifies the world’s leading medical experts. Dr. Mikkelsen was recognized for being among the top .04% of scholars writing about glioblastoma, the most aggressive form of brain cancer, over the past 10 years.

To determine its rankings, Expertscape examines all medical publications that are indexed in the National Library of Medicine's MEDLINE database. Expertise is ranked according to the number and type of articles each expert has authored. In total, Expertscape has ranked more than 75,000 glioblastoma scholars worldwide. Those listed by Expertscape have demonstrated their expertise and knowledge of glioblastoma by writing articles that are published in medical literature.

A major step forward for precision medicine, GBM AGILE is the first-ever adaptive platform trial for brain cancer and a move away from the traditional, one-size-fits-all approach to clinical trials. The trial, conceived by over 130 key opinion leaders, is conducted under a master protocol, allowing multiple therapies or combinations of therapies from different pharmaceutical partners to be evaluated simultaneously. With its innovative design and efficient operational infrastructure, data from GBM AGILE can be used as the foundation for a new drug application and biologics license application submissions and registrations to the FDA and other health authorities.

An internationally recognized expert in neuro-oncology and precision medicine, Dr. Mikkelsen received his medical degree from the University of Calgary and completed clinical training in neurology at the Montreal Neurologic Institute. He completed his post-doctoral training in Brain Tumor Cellular and Molecular Biology at the Ludwig Institute for Cancer Research in Montreal, and then in La Jolla, California. Dr. Mikkelsen co-founded and managed the Hermelin Brain Tumor Center at Henry Ford, including the brain tumor biorepository, an internationally recognized resource for biospecimens and the clinical annotation associated with them, for more than 20 years. This resource was a major contributor to the international, ground-breaking cancer genomics program, The Cancer Genome Atlas (TCGA).