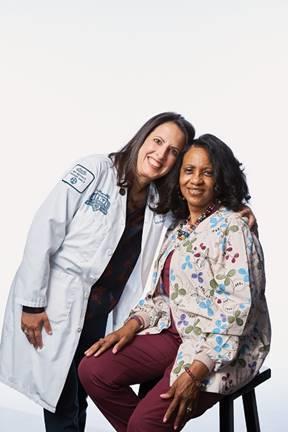 DETROIT – (October 7, 2020) More than 440 Henry Ford Health System doctors have been named by Detroit’s Hour Magazine as “2020 Top Docs.” Among them is Henry Ford’s Medical Director of Care Experience Rana Awdish, M.D., a critical care medicine specialist and pulmonologist named in two categories and part of a select group of physicians featured alongside non-physician colleagues being recognized for extraordinary work during the challenging, trying days of COVID-19.

One unsung Henry Ford hero is Judith Gray-Davis, a nurse assistant and colleague of Dr. Awdish in the critical care unit at Henry Ford Hospital, the first unit designated all COVID-19 patients at the height of the pandemic and to go on to lose – and save - many patients.

Judith was truly a front-line healthcare worker, the comforting connection between loved ones and critically ill patients saying goodbye, needing to settle financial matters, or just being there to keep them from being alone, said Dr. Awdish.

“It’s important to note that the heaviest lifts, in some ways, were by people who don’t routinely have their incredible work acknowledged,” Dr. Awdish said. “She unburdened us, and it was at a moment where the greatest gift of love was unburdening someone when they can’t handle anymore. That’s what Judy did for us.”

Gray-Davis, who appeared with Dr. Awdish on the cover of this month’s “Top Docs” issue, said in an emotional video interview: “At that time, I’m their family. I’m their loved one, I’m all they have.”

The unsung heroes gave this year’s Top Docs list a different feel. The goal, according to Hour Detroit, is to “to honor medical professionals from our 2020 Top Docs List - and the heroes who keep them going.”

“At a time when the nation is suffering not just from a relentless pandemic, but also from deep social divisions, we can find solace in our shared appreciation for the risks and sacrifices frontline healthcare workers face daily on our behalf,” the magazine wrote.

All in all, the personal recognition for these unsung heroes reflects the efforts of Henry Ford’s 33,000 employees who have weathered the worst of COVID-19, Dr. Kalkanis said.

“This support and vote of confidence, expressions of gratitude and recognition go a long way in reminding the many, many healthcare workers who also provide our patients with the best care and experience possible, that they are deeply valued. This is a proud moment for Henry Ford.”