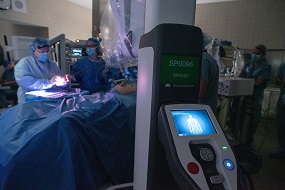 The da Vinci SP is less invasive and gives surgeons the ability to treat some head and neck cancers that were once considered inoperable.

DETROIT (Nov. 19, 2020) –  Henry Ford Health System is the first in Michigan to offer the da Vinci SP® robotic surgery system, which requires only a single small incision for its surgical instruments and allows for greater control and access in narrow surgical spaces. Other da Vinci robots require 3-4 small incisions for access, and while extremely advanced for many procedures, the single port robot can help surgeons to perform delicate surgery in small spaces for certain patients with prostate cancer, kidney cancer, ureteral strictures and certain types of head and neck cancers.

Because the SP system allows all of the robotic instruments and camera to work through one small incision, Dr. Rogers said many patients will experience less pain and may be able to be discharged the same day as the surgery, versus staying overnight at the hospital, which is typically required after standard robotic prostatectomy.

Surgeons at Henry Ford have used robot-assisted techniques to improve outcomes for people with many types of cancers, including prostate, bladder and kidney cancer, as well as head and neck cancers and many others.

For surgical procedures of the head and neck, a major advantage of the da Vinci SP surgical system is that its three fully-articulating instruments and camera enter the mouth through a single 27mm cannula entry point, versus each of them having to enter individually. This has made some cancers operable that were previously inoperable due to instruments being unable to reach them.

“In addition to being able to operate on cancers we previously couldn’t reach, this robotic surgical system offers the advantages of less bleeding, being more minimally invasive, and providing a quicker return to function for the patient,” said Tamer Ghanem, M.D., Ph.D., Director of the Head and Neck Surgery and Microvascular Surgery Fellowship in the Department of Otolaryngology at Henry Ford Hospital. “It can also reduce the need for radiation therapy in some patients, as some cancers that may have been only treatable with radiation can now be removed surgically.”

According to the Centers for Disease Control and Prevention (CDC), in 2017, the latest year for which data are available, 46,157 new cases of oral cavity and pharynx cancer – also known as head and neck cancers – were reported in the U.S., and 10,126 people died of these cancers. Risk factors include smoking and heavy alcohol use, although recent studies show that approximately 70 percent of cancers of the oropharynx may be linked to HPV.