This Retired NHL Goalie Received the Ultimate Save 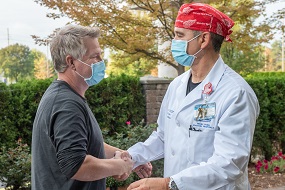 DETROIT (September 23, 2021) – Retired NHL goalie Manny Legace knows the importance of making crucial saves at the right time. Now, he’s grateful for the timely care he received from the team of doctors and nurses at Henry Ford Macomb Hospital, who he credits with saving his life after testing positive with COVID-19.

“I can’t say enough great things about what Henry Ford Macomb did for me,” said Legace. “Every nurse and doctor in the ER and ICU floor who took care of me were absolutely first-class, amazing people.”

Legace is the current goaltending coach for the NHL’s Columbus Blue Jackets. In his 18-year playing career, he played with five NHL teams, including the Detroit Red Wings and their 2002 Stanley Cup team.

Legace and his wife Giana began experiencing COVID-19 symptoms around Aug. 19. While his wife’s symptoms were mild and short-lived, his condition worsened. By Labor Day, Sept. 6, Giana became very concerned for him and reached out to family friend Anthony Colucci, D.O., Medical Director at Henry Ford Macomb Hospital’s emergency department.

“When I talked to Manny’s wife, he was struggling with his breathing,” said Dr. Colucci, who recommended she call 911 and get her husband to the nearest hospital. Instead, Giana insisted on making the hour drive from Novi to Henry Ford Macomb in Clinton Township. 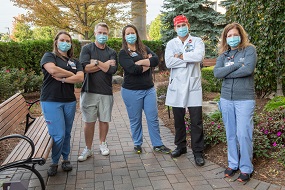 Dr. Colucci met Legace at the ER entrance. “He was on the cusp of being intubated by the time he arrived for treatment,” said Dr. Colucci. With Legace’s oxygen saturation level at 77 percent, Dr. Colucci immediately put him on oxygen treatment. Legace also received remdesivir, an antiviral medicine that works to stop the virus from spreading.

After imaging tests revealed blood clots in his lungs, Legace was admitted to the intensive care unit. He was released from the hospital on Sept. 12.

Nasir Husain, M.D., Chief of Infectious Disease at Henry Ford Macomb, said Legace was very sick but was fortunate to not require a ventilator. Dr. Husain recommends that people who experience COVID-like symptoms, especially those with existing medical conditions who may be at higher risk, should get tested and seek medical care immediately.

The day after his release from the hospital, Legace posted a message of gratitude on his Instagram channel to thank the Henry Ford Macomb staff that took care of him. “My words cannot express how grateful I am to my wife GI, Henry Ford Macomb Hospital, Dr. Colucci and Dr. Husain and the entire ICU unit, who are an amazing staff. Thank you for #savedmylife.”

He also warned people of the seriousness of COVID-19. “This disease is not a joke.”

Legace, who was previously scheduled to receive his COVID-19 vaccine on Sept. 1, is now expected to receive it in about 8 weeks, per CDC guidelines. The CDC recommends vaccination because it better protects people after having COVID-19.

Since leaving the hospital, Legace said he feels sluggish but understands that it will take time to get over the effects of COVID-19.

“Drs. Husain and Colucci and the ICU staff saved my life, along with my wife who got me to the hospital,” said Legace, “Had I waited longer, and with those blood clots in my lungs, it could have been over for me. Don’t know if my heart could have taken that hit.

“I’ve never been around more professional people in my entire life. I love them so much, it’s unbelievable how great the people were at Henry Ford Macomb,” he added.