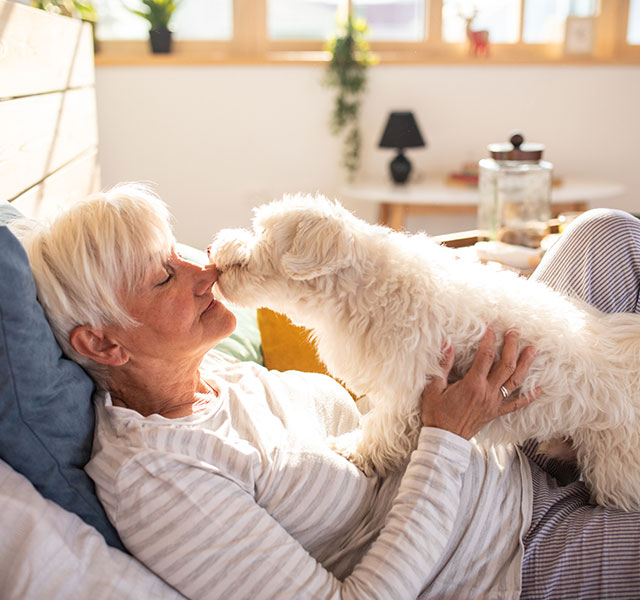 If you are a long-term pet owner, you may be in luck: a recent study involving people ages 50+ showed that owning a pet for at least five years may help keep your brain sharp.

This could be due to a few factors, says Jannel Phillips, Ph.D., a neuropsychologist at Henry Ford Health. It’s possible that having a long-term, furry companion helps to preserve the hippocampus, which is an area of the brain that’s responsible for memory. And changing hormones could also be at play. “When you have a sense of duty and purpose, when you have a companion, you release endorphins and hormones that are linked to feeling happy and can help preserve your brain,” she says.

Long-term pet ownership likely has a positive cognitive effect because it allows time to facilitate a strong, deep bond and establishes a necessary daily routine, which is important for aging adults.

Another factor the study took into consideration: socioeconomic status. Owning a pet can be expensive, so those involved in the study were likely at a higher socioeconomic bracket—meaning they probably had better access to healthcare, overall, and that might also contribute to delayed cognitive decline.

A majority of people involved in the study had dogs. Cat owners were second in popularity, and others had pets as varied as reptiles, rabbits and hamsters. Animals in general have been shown to reduce anxiety and combat feelings of loneliness, which can not only make you feel better but can also actually impact your cognitive function. (Emotional support animals are available to people for good reason!)

That said, Dr. Phillips hypothesizes that owning a dog likely provides the most brain-boosting benefits.

“Having a dog can really impact older adults’ day-to-day lives,” she says. “You have to walk your dog every day, and so you’re getting regular physical activity. Getting outside daily can also increase your level of socialization, as you’ll likely interact with other animal lovers at the dog park or around the neighborhood. And then just playing with your dog—dogs are called man’s best friend for a reason. This companionship itself can increase connectivity in the brain and become a protective agent against aging.”

That’s not to say you should run out and get a dog if you’ve never had one before. “It’s a big responsibility. It could lead to more stress and turn into a fall risk, depending on the size of the dog,” says Dr. Phillips. “Another thing to consider is that however close you and your dog are, if they pass away, that could be really difficult to deal with and could contribute to depression. Then, if you’re not getting outside anymore or stimulating your brain, you are potentially more susceptible to cognitive decline. It could go both ways.”

Pets are wonderful, but if you don’t have one, don’t worry: here are a few additional ways to keep your brain sharp as you grow older.