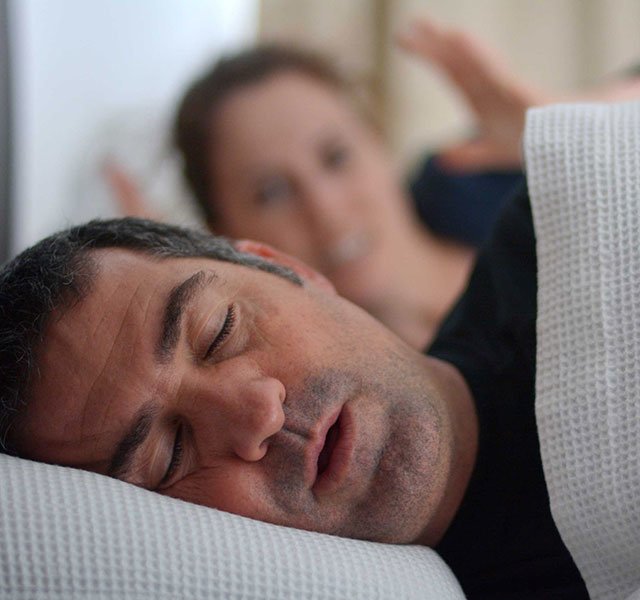 Is A Deviated Septum Causing Your Snoring Or Breathing Issues?

There are many issues that can cause difficulty breathing through the nose. Do you have a bad cold? Are you suffering from allergies? Or could it be that your nose is crooked?

The nasal septum is a bone and cartilage structure inside the nose that separates the nostrils. When it is crooked, or “deviated,” it can cause a host of issues, the most prevalent being obstruction of air flow through the nostrils.

If you suffer from a deviated septum, you aren’t alone, explains John Craig, M.D., an ear, nose and throat (ENT) physician who specializes in rhinology (the care and treatment of the sinuses and nasal cavities). In fact, according to the American Academy of Otolaryngology-Head & Neck Surgery, it’s estimated that 80 percent of all nasal septums are deviated, though most do not require any treatment.

What causes a deviated septum?

“The most common reason for a deviated septum is, you’re born with it,” Dr. Craig says. It’s also not uncommon to occur after trauma to the nose from an accidental injury or from prior nasal surgeries.

Are there any symptoms?

The primary symptom of a deviated septum is difficulty breathing through either one or both nostrils. Other symptoms can include nosebleeds or, in some cases, a change in the patient’s external nasal appearance. It can also cause excessive snoring and difficulty sleeping, especially for those with sleep apnea.

Depending on the location and deviation of your septum, you could have no issues at all.

“Most deviated septums are found on the inside of the nose, so your nose could look straight on the outside, yet you are having trouble breathing because of it,” Dr. Craig says. “On the other hand, you could have a crooked nose on the outside and yet the septum inside is straight and you have no issues.”

Consulting with your ENT doctor is the best way to determine whether or not your septum is deviated, the location of your septal deviation, and what (if any) treatment is appropriate for you.

My septum is deviated. Now what?

It’s important to note that just because you have a deviated septum, you may not require any treatment – especially if you aren’t experiencing any symptoms or discomfort because of it.

If it is affecting your breathing or sleep, however, there are numerous non-invasive treatment options, including nasal steroid or saline sprays, or breathe-right strips. If your symptoms don’t improve, a septoplasty (surgery to straighten the septum) may be a good option for you.

If your deviated septum alters the appearance of your nose, your doctor may refer you to a facial plastic surgeon for a rhinoplasty (surgery to reshape the nose). This procedure adjusts the shape and size of your nose to fit with your facial structure, and can improve your ability to breathe.

If a deviated septum isn’t the cause of your nasal congestion or other symptoms, you could be experiencing another condition. Examples include allergies, sinusitis, and sometimes even medications or herbal supplements you may be taking.

The bottom line: If you feel you’re having trouble breathing through your nose and it’s bothering you, ask your doctor if a visit to an ENT doctor or subspecialty trained rhinologist is an option for you. You want to get the most thorough evaluation possible to determine the most effective way to improve your quality of life.

Do you have difficulty breathing or suffer with other sinus issues? Schedule an appointment with a Henry Ford sinus expert today by visiting henryford.com or calling 1-800 (HENRY FORD) 436-7936.