What is Growing in the Greenhouse?

The Greenhouse provides nutritious, organic food to our patients and communities, but it also reduces hospital food costs.

The new Greenhouse is full of organic fruits and vegetables which are used in patient meals, at Henry's, and are sold at the hospital’s weekly seasonal farmers’ market. Some of the organic items being grown hydroponically (growing plants in water instead of soil), include:

The Greenhouse provides nutritious, organic food to our patients and communities, but it also reduces hospital food costs, including the estimated production of: 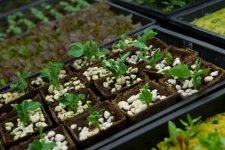 In addition to feeding patients, the produce is also used in the Demonstration Kitchen, Henry’s Café and at the Henry Ford West Bloomfield seasonal farmers’ market, which is open to the public.

Our Greenhouse Coordinator works closely with our chefs so they know exactly what is being grown and when it will be available. As a result of this collaboration, our chefs provide their suggestions on what they would like to be grown. In turn, the Greenhouse is a win-win for our patients, the community and the hospital, providing fresh greens from Greenhouse to plate in less than 24 hours.