Grit in the Face of Cancer 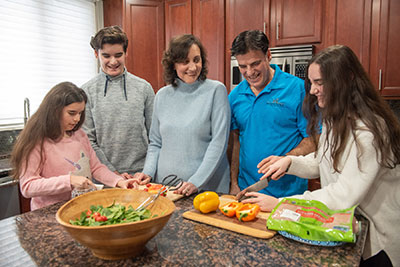 Violeta Gjolaj was part of an “average hard-working family” – until age 43 when she was diagnosed with a rare fast-growing jaw cancer. Then there would be new meaning to family and hard work.

As a mom with a pre-adolescent son and slightly younger twin daughters involved in extra-curricular activities, Violeta worked full-time as an engineer for one of the big three automakers, and her husband worked long hours in real estate.

Amid all this, it was a toothache that sent Violeta to the dentist. Then a numb lip and chin sent her to a neurologist. The MRI was normal. Her intuition sent her back to the dentist, “Something was telling me this is not right,” says Violeta. A specialist said a root canal couldn’t be done. An oral surgeon extracted the tooth and sent it to a lab. Then another lab. It was confirmed: jaw cancer – aggressive chondroblastic osteosarcoma.

The oral surgeon gave her “extremely urgent” instructions to contact surgeon Tamer Ghanem, M.D., Ph.D., director of the Henry Ford Head and Neck Cancer and Microvascular Surgery Fellowship. “Dr. Ghanem was so compassionate and easy to talk to. I felt like I was talking with an old friend,’” recalls Violeta. “He was encouraging and recommended that I get second and third opinions.” 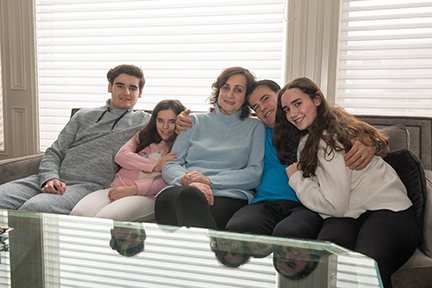 Building confidence was important. The surgery would be extensive – remove eight more teeth and a large portion of the jaw, rebuild her jaw with bone from her leg, and reconstruct her cheek with leg tissue and its blood supply. Then undergo six rounds of challenging chemotherapy, requiring hospitalizations.

“Although this cancer was only stage 1, it is remarkably aggressive and very difficult to remove. It can be extremely life-threatening,” says Dr. Ghanem. “This is not a surgery that you can hide. It would affect her appearance, speech and swallowing.”

“I’d been keeping the cancer a secret, but a Henry Ford counselor specializing in cancer said to be open and frank,” says Violeta. She didn’t want to worry her parents who had lost a son and daughter. “I had to retain my composure and remain positive for them.”

The chemotherapy had side effects – fatigue, hair loss, impaired hearing and dangerous fluctuations in blood cell counts. Medications and blood transfusions helped. Eating and drinking were difficult. But contact with family, friends and coworkers made a difference.

During all this, her husband Kola and family members worked to maintain a sense of normalcy for the children. “I’d come home from the hospital and my kids would be so happy to see me, and I’d get a burst of energy, even though I was exhausted,” says Violeta who speaks with excellent enunciation. “I practice by talking a lot,” she laughs.

In her home with family portraits and religious pictures, Violeta says softly, “It sounds cliché, but faith has helped me through all of this. I pray every night for love, peace, joy and health.”

“I used to take many things for granted – eating, drinking, walking outside and seeing friends. But cancer made me reflect on what’s important in life,” says Violeta. “I’m forever thankful for the support and encouragement of my husband, parents, sister, kids and nephews. My parents were here tirelessly, tending to our family’s needs. My sister made sure I received the proper nutrition and took me to medical appointments.”

To relax, Violeta and her daughters read and do scrapbooking, while the guys talk politics and play basketball. “Looking back on the good memories is my way of healing,” she says. Looking forward also helps.

Violeta recently earned her broker’s licensed and formed a real estate company with her husband. Then she returned to full-time work as an engineer. She also fulfilled a dream by starting a fashion business with a high school friend. “I’ve had my ups and downs. But you can’t let cancer take over your life,” says Violeta whose speech conveys quiet, straightforward determination.

Says Dr. Ghanem, “Violeta was initially flabbergasted by her diagnosis, but she shows a lot of grit, doing everything she can to live and thrive even in this pandemic. It makes me feel good to see patients recover and push themselves to attain new things. She has a strong will to get well. That’s what got her through this.”

“Someone once told me, ‘The only time you should ever look back is to see how far you’ve come.’ At any point, you can look back – even right after you’ve heard the cancer diagnosis. You’ve crossed a hurdle! Then, it’s time to fight,” says Violeta.

Cancer does not respect age, race, gender or ethnicity, she says. Rely on your instincts – trust your mind and body. Avoid information overload. Instead, contact medical professionals.

Violeta is in the process of getting dental implants and receives routine scans for at least 4 years. In the meantime, she takes one day at a time, hoping for health and a healthy family.

Our surgeons have experience in the total range of surgical treatments. And our team is a leader in groundbreaking surgical techniques to treat head and neck cancers.
Read About Surgical Options
Newly diagnosed?