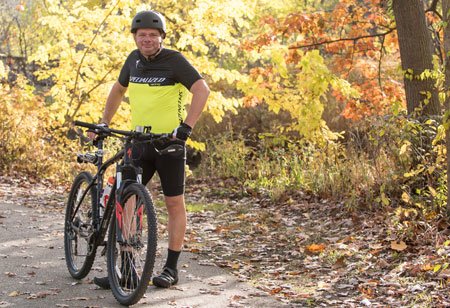 Mark Hofman’s only daughter left for college, the single dad from Romeo decided it was time to start taking better care of himself. Years of stress and neglecting his health had taken their toll.

“I was having horrible problems with my blood pressure. My doctors said I was maxed out on blood pressure medication and he couldn’t do anything else for me,” said Mark. “He referred me to Henry Ford Macomb’s Center for Weight Management.”

Mark began the program half-heartedly in October 2015, weighing in at 334 pounds. He had tried losing weight on his own twice before, but never with any lasting results. After an initial consultation, he chose the Healthy Solutions diet, which incorporates HMR weight management products with plenty of vegetables, weekly group meetings, coaching and lifestyle education.

“I have never been able to control my eating, so I didn’t expect it to be as effective as it was. I did exactly what they told me to and the weight just peeled off. I lost the majority of it in the first six months. They really know how to help people,” said Mark, who now weighs 223 pounds and is on a maintenance diet.

The significant weight loss helped Mark to wean off of most of his medications. He also found the willpower to kick his heavy smoking habit about a year ago, with the help of Chantix. His overall health is much better now.

Losing weight also got Mark back into one of his favorite activities. “I really love to ride my bike. With the excess weight, I gave it up for many years. This year, I even completed the PALM (Pedal Across Lower Michigan), a six day bike tour. “

His daughter couldn’t be prouder of him. “She’s my biggest reason for losing weight and giving up smoking. I want to be around for her for many years. She needs me in her life,” said Mark.