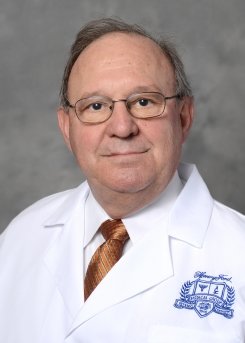 B.S., Nuclear Engineering, SUNY Maritime College, Throggs Neck, NY 1965
M.S., Nuclear Science, Cornell University, Ithaca, NY 1971
Ph.D., Medical Physics, Oakland University, Rochester, MI 1992
Research Interests
Parametric Estimates of Cerebrovascular Physiology:
I am the Director of the Small Animal MRI/MRS laboratory, the PI of R01 CA135329-01 MRI Biomarkers of Response in Cerebral Tumors, and a Co-I on R01 CA129446-01 (PI Jiang, Feng) ADAM17 and Glioma-tumor Progression and Treatment. My long-term interests have been in developing noninvasive unbiased estimates of the parameters of cerebrovascular physiology, including cerebral blood flow (CBF), cerebral blood volume (CBV), the transvascular transfer constant, Ktrans, for an indicator, and such other related parameters as extracellular volume fraction, interstitial fluid pressure, and interstitial volume fraction. My expertise in MRI was developed with the aim of characterizing the sources of Magnetic Resonance Imaging (MRI) contrast in cerebral tissue, associating MRI contrast with specific cerebral pathologies, and utilizing sources of contrast, including contrast agent, to estimate the parameters of vascular physiology.  I was trained as an experimental physicist, and my base expertise is in estimates of model parameters and the description of the errors, both systematic and random-like, of those parameters.
MRI Biomarkers of Response in Cerebral Tumors:
This R01 uses magnetic resonance (MR) contrast agents (CAs) and MR detection to measure blood volume, the blood-to-brain transvascular transfer constant, the extravascular extracellular space, and the total extracellular space in cerebral tumors, and also to measure tumor blood flow using MR arterial spin tagging.  These parameters present an important summary of the physiology of vasculature, both normal and tumorous.  It is proposed to use these vascular parameters as MR biomarkers in animal models of cerebral gliomas.  In a series of experiments, we are examining the change in MR-measured vascular parameters after antiangiogenic therapy, after vascular disrupting agent, and after RT, with all MR measures correlated with histopathological assessments of vascular and cellular density in the model tumors.  After single-agent therapies, combination therapies will be studied, and MRI vascular biomarkers will be examined as predictors of response as judged both by histopathological assessments and long-term survival.
At the completion of these studies, the relation of MR-measured vascular parameters to cellular responses to single and combination therapies will be established, and the utility of MR-measured vascular parameters as predictors of long-term survival assessed.  The MR-measured parameters can be translated to clinical use and evaluated as predictors of human tumor response to therapies.  These studies represent a first step in a paradigm shift in cancer treatment delivery from a heuristic and formulaic approach to an individualized plan of image guided treatment and response monitoring.
MRI Measures of CA concentration:
Fundamental to the determination of cerebrovascular parameters using CA is the relationship between tissue CA concentration and MRI contrast.  In Dynamic Contrast Enhanced studies using T1-weighted imaging (DCE-T1), it is often assumed (in a model we call the Standard Model, SM) that the change in the calculated longitudinal relaxivity, R1 (R1=1/T1) is linearly proportional to tissue CA concentration; given this assumption, the vascular parameters CBV (or vb), Ktrans, and sometimes the extravascular, extracellular volume fraction, ve, can be estimated (1). This linearity has been challenged by the proponents of the 'shutter-speed model' (SSM), in which the rate of water exchange between vascular, interstitial, and intracellular compartments is taken into account (2-4), purportedly correcting for the nonlinear relationship between CA tissue concentration and changes in R1. A contrary finding has been recently published, demonstrating little advantage for the SSM (5). Since our laboratory gathers and analyzes data, both for the purposes of the mentor, and for three other NIH-funded investigators who are currently performing MRI studies of vascular permeability in tumor (Drs. Feng Jiang and Quan Jiang) and stroke (Drs. Robert Knight and Quan Jiang), the question of model selection has been of primary interest to us. The results of our investigations, both theoretical(6) and experimental(7), demonstrate that there is an approximately linear relationship between CA concentration and MRI R1 measures, but that because of intercompartmental water exchange, the slope of the relationship (the relaxivity changes).
Specialized MRI sequences and post-processing:
The MRI/MRS laboratory has developed an expertise in measures of cerebrovascular physiology.  Beside the usual T1-weighted, T2-weighted, Diffusion-weighted sequences for anatomical studies, the laboratory has MRI pulse sequences and specialized post-processing software for the determination of CBF, CBV, Ktrans maps and related DCE-T1 analyses, T1 maps, T2 maps, maps of the apparent diffusion constant (ADC), fiber-tracking maps, maps of fractional anisotropy (FA), Susceptibility-Weighted Imaging (SWI), single-iteration phase unwrapping, the production of ISODATA composite maps for the assignment of tissue signatures through k-means transforms, etc.  Most of the post-processing software was developed in-house.
Data collection for collaborators:
The Small-Animal MRI/MRS laboratory is a core facility of the Department of Research at Henry Ford Hospital, dedicated to helping other investigators to acquire data in small animals (rats and mice) in two 7T MR systems. Currently, at least eight NIH-funded investigators routinely run studies in the laboratory's systems. This laboratory has all the necessary equipment for high-field in vivo imaging of small animal models of stroke, cerebral trauma, and cerebral tumor, and routinely produces parametric maps of cerebrovascular physiology. Moreover, attached to the laboratory are personnel well versed in preparing various types of tissues for histological and immunohistochemical analysis.
Awards, Honors and Publications
Other Experience and Professional Memberships
1984-Present Ad-Hoc Reviewer, Magnetic Resonance in Medicine, Stroke, the Journal of Cerebral Blood Flow and Metabolism, Society of Magnetic Resonance in Medicine
1997-Present Ad-Hoc Reviewer, Medical Research Council of Canada
1998 Ad-Hoc Reviewer, National Institutes of Health Special Study Section on MRI in Aids
2004 Ad-Hoc Reviewer for National Institutes of Health Shared Instrumentation Study Section
2005 Ad-Hoc Reviewer, Special Emphasis Panel/Scientific Review Group
2005-2006 Ad-Hoc Review for National Institutes of Health Clinical Neuroscience and Disease (CND) Study Section
2006 Ad-Hoc Reviewer for National Institutes of Health Shared Instrumentation Study Section
Honors
1968-1970 Atomic Energy Commission Traineeship
1966-1968 Atomic Energy Commission Fellowship
Publications