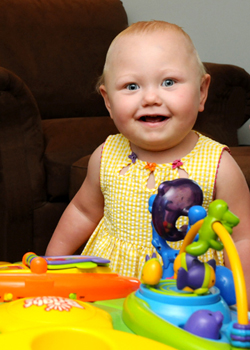 Little Stella is our true miracle, who is here with us today against all odds. The journey really began more than seven years ago when we were told that we may have a difficult time getting pregnant due to the discovery of a very severe case of endometriosis. However, we would not let this stop us from pursuing our dream of starting a family. Almost immediately, we began seeking help from fertility specialists. We spent five challenging years and went through many treatments. After many unsuccessful attempts, our wish finally came true and we learned we were pregnant!

From the beginning, the pregnancy was very smooth. Jennifer never experienced any morning sickness and generally felt very good. We had an ultrasound at 20 weeks, where they told us our baby was on track and everything looked great. It wasn't until this ultrasound that we started to believe everything was going to be okay. Unfortunately, things would take a drastic turn at week 23 when we noticed something was wrong and called our ob-gyn. She told us to go immediately to Henry Ford Wyandotte Hospital to be examined. When we arrived at the hospital, we learned Jennifer was going into pre-term labor and was already dilated 7-8 cm with a protruding water bag. With gestation being just 23 weeks at the time, they did not give us much hope.

Jennifer was transferred by ambulance to Henry Ford Hospital Detroit. They tried everything to stop the pre-term labor, but little Stella did not want to wait any longer. When she was born, the doctors told us they did not expect Stella to live, and said if she did, she would most likely suffer from a myriad of health problems. Imagine being told your little baby may not survive. We were heartbroken.

The NICU journey was filled with many ups and downs. We spent day after day sitting by our daughter's bedside.After 10 days in the NICU, baby Stella first opened her eyes. After 17 days, we were finally able to hold our precious miracle in our arms. Stella continued to fight hard every day and faced many obstacles such as PDA ligation, edema, collapsed lung, MRSA, and ROP. Just months after Stella was born, she faced her toughest obstacle, necrotizing enterocolitis (NEC), a life threatening disease. Stella had emergency surgery to remove part of her bowel and three more surgeries to follow.

Thanks to the dedication of the NICU staff at Henry Ford, Stella beat all odds. After 196 days in the NICU, we were finally able to bring baby Stella home.

Find Your Ideal Pregnancy Expert
We can match you with a doctor or midwife.
Let's get started
X