HFHS is one of the charter member organizations of the Health Care Systems Research Network (HCSRN). Eighteen health plans and integrated delivery systems from across the nation (and globally) form the infrastructure for research collaboration with over 2,000 scientists and research staff with methodological and subject matter expertise in a wide array of expertise including epidemiology, economics, disparities, outcomes and quality assessment, clinical trials and genomics.  Major areas of focus include cancer, cardiovascular disease, mental health, addiction, and suicide prevention studies have ranged from rare to common diseases, and health and disease across the life course.

One of the key innovations of the HCSRN is the creation and maintenance of the Virtual Data Warehouse (VDW). PHS has taken the lead in the creation and maintenance of the VDW at Henry Ford. Health care and population data from local sources are transformed into a common data model, greatly improving the efficiency of multi-center research projects. The VDW served as the basis for the data model used by the Sentinel Initiative, a major surveillance effort for medical product safety of the US Food and Drug Administration (FDA).  Within HFHS the VDW is widely used for both HCSRN-related projects and intramural research including general medical education and HFHS-investigator led research.

The Cancer Research Network (CRN), the first sub-network of the HCSRN, was supported by the National Cancer Institute from 1999-2017 with HFHS Public Health Sciences as one of its founding members. The CRN supports cancer research that could not be accomplished in a single health care system. Some of these include studies of cancer prevention and rare cancers and studies that examine the impact of national policies or guidelines for cancer and cancer care delivery. In September 2012, the CRN was renewed successfully as a U24 research resource cooperative agreement, its fourth NCI-supported grant cycle. Recent and ongoing CRN studies led by scientists in PHS include: statins & lymphoid malignancy risk, encouraging adults to make effective nutrition choices, and the impact of the US Preventive Services Task Force recommendation to stop wide-spread use of PSA screening on PSA surveillance after a diagnosis of cancer.

Similarly, HFHS, led by PHS faculty, Dr. Lois Lamerato was one of the founding members of the Cardiovascular Research Network (CVRN), which began in 2007. PHS has participated in several CVRN studies. In the Longitudinal Study of Implantable Cardioverter Defibrillators (ICD), HFHS along with six other HCSRN sites combined data from the VDW, ICD therapy data available from the EMR, and the National Cardiovascular Data Registry to identify risk factors for appropriate and inappropriate ICD therapy (shocks and pacing).  HFHS was also one of 15 HCSRN sites nationally to participate in the Cardiovascular Disease Surveillance Study, which examined the incidence of major cardiovascular disease outcomes (myocardial infarction, stroke and heart failure); this was a first step towards public health need for a nationwide cardiovascular disease surveillance program.

Today, the HCSRN has evolved into a network of networks.  In addition to the CRN and CVRN, networks include Addiction Research, Aging Initiative, Mental Health Research Network, and Supreme-DM. 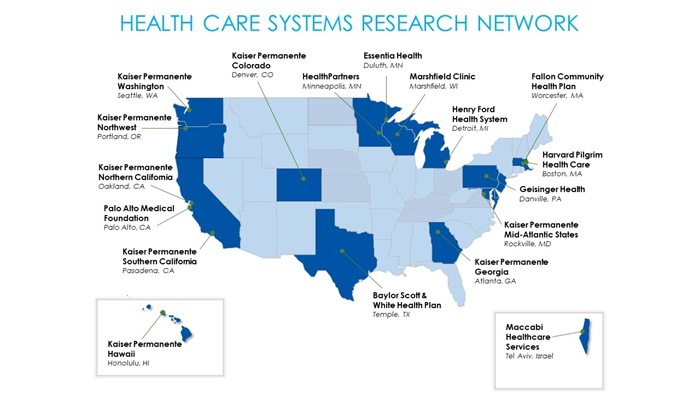