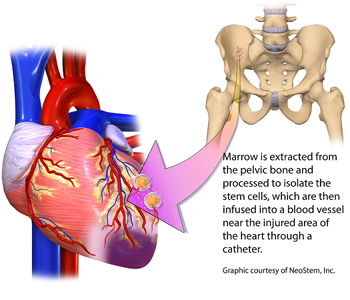 Retired science teacher and former principal of Cass Tech High School Lenora Ashford, 64, of Detroit, was recovering from a heart attack at Henry Ford Hospital, when her cardiologist asked if she would like to be part of a new national research study. He felt she could be a candidate to participate in a study to investigate treating a recent heart attack with a patient’s own stem cells to preserve heart muscle function.

Henry Ford is the first hospital in Michigan to participate in the PreSERVE AMI Phase II research study, for adults who have received a stent to open a blocked artery after an acute heart attack, who also meet other criteria.

“As a teacher, I always encouraged my students to participate in science projects,” says Ashford. “Now I could become part of a science project. It was an opportunity to practice what I preached, and I felt it would be beneficial.”

It was determined that Ashford was qualified to participate in the study, which has very strict entry criteria for patients. She had marrow harvested from her hip bone to isolate her own stem cells for the procedure. Two days later, following the rules of the study, either the processed stem cells or a placebo were infused through a catheter in the coronary artery to the area of damaged heart muscle. Both the harvesting and the infusion of stem cells are outpatient procedures.

“Stem cell therapy offers new potential approaches in the treatment of acute heart attack patients to prevent further damage to heart muscle and improve function," says Gerald Koenig, M.D., Ph.D., a cardiologist and researcher at Henry Ford. “Current standard treatment options only limit the weakening of the heart. This is why we are studying stem cell therapy, which looks very promising, but it is still an investigation, not an established treatment.”

The body has a way to repair itself. When a heart attack occurs, the heart sends a distress signal to the body, which then sends repair cells to the injury site. In some cases, depending on the severity of damage, the repair is insufficient, with a poor prognosis for the patient. A dead zone of tissue develops in the heart, while the surrounding healthy heart cells are stressed as they work harder to pump blood.

The American Heart Association, with the assistance of the National Institutes of Health, reports that an average of 16 years of life may be lost due to a heart attack.
“Previous studies using adult stem cells to limit heart muscle damage and improve function have had mixed success,” says Dr. Koenig. “Some studies have tried to do this too soon after a heart attack, and some tried the procedure at a later time.

“It has been determined that there’s a window of opportunity - one week to 10 days after a heart attack - which is the most effective time for stem cell treatment.”

The type of stem cell used to treat heart muscle is critical for success, according to Dr. Koenig, as well as the number of cells infused. When the correct amount of the right cells are used in the specified timeframe, the possibility of preserving heart function is much higher.

“We look for a specific stem cell that has the capability to improve the function of the heart, potentially by regenerating tissue, or as in this case, preventing the loss of heart muscle that typically continues for weeks after the heart attack,” he says.

“An acute heart attack can severely weaken heart muscle. Today’s therapies, including balloon angioplasty and stents to reopen blocked blood vessels, and medication, have raised the survival rate for patients. However, one third of heart attack survivors has a significant amount of damage to the heart, and is at high risk to develop congestive heart failure over several years.”