Lifelong Runner Back to Routine After New, Nonsurgical Treatment

Anne is lacing up once again, thanks to a new, nonsurgical treatment that uses her own cells to regenerate torn hamstring. 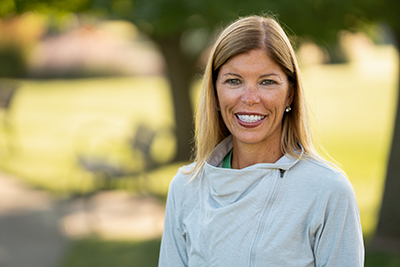 Anne Hornak, Ph.D., a professor at Central Michigan University, is an avid runner. From high school cross country and track to running marathons, she has performed at an elite level for most of her life. Running is her passion, and it helps keep her grounded.

So when she tore both of her hamstrings and could barely walk — much less run — it was devastating.

“Pain started shooting down the back of my legs,” Anne says. “Each leg felt like it wouldn’t bend from the buttocks down. The backside of each leg was all tense, almost like they were frozen.”

For two years, Anne tried any treatment she could to alleviate the pain and get her mobility back. She tried physical therapy. She tried chiropractic care. She tried multiple steroid injections. But nothing worked. Finally, she had an MRI done on her legs and learned that both of her hamstring muscles were 95% torn.

“Running is not easy on the body,” says Ramsey Shehab, M.D., Deputy Chief of Henry Ford Sports Medicine. “And unfortunately, the older we get, the more strain we put on our joints and tendons. With the repetition, your body eventually gives.”

In Anne’s case, she could still function, but the injury was having a serious impact on her quality of life.

“The other therapies Anne tried, including steroids, provided some short-term pain relief,” Dr. Shehab says. “But after they ran their course, she was back to square one. Steroids don’t have regenerative properties, and over time, repeat injections into tendons can cause damage, including tendonitis. She needed a better solution.”

“One of my friends told me about Dr. Shehab, and about this nonsurgical treatment called PRP injections,” Anne says. “When my friend told me Dr. Shehab was also the Pistons’ doctor, I thought there would be no way I could get in to see him. But it’s actually not that difficult.”

PRP stands for platelet-rich plasma, and it’s a newer, injectable ortho biologics treatment that features both anti-inflammatory and regenerative properties. It is used to treat several types of orthopedic conditions, including tendinopathy ( when tissue connecting muscle to bone becomes inflamed), tears, even some arthritis.

“Anne came to see us, specifically looking for PRP injections,” Dr. Shehab says. “When we saw her, we were impressed by her drive and motivation to get better, and we thought she’d be a good person to try this with, especially given her goals.”

Before she could return to running, Anne needed to get her hamstrings back to their natural state. Left to its own devices, when the body experiences a tendon injury like a tear, it will heal by developing abnormal scar tissue, which is very stiff. 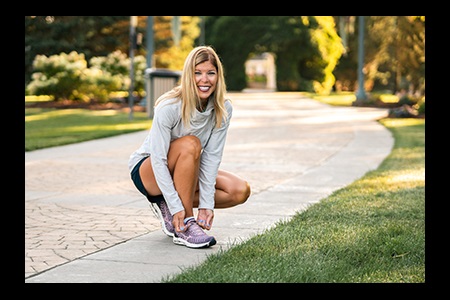 “PRP tries to mimic the body’s natural healing process as much as possible, but with tissue that has elasticity, so it has the ability to bend and move and stretch,” Dr. Shehab says. “We can’t recreate natural tissue, but we can coax the body into a better healing process.”

The procedure was surprisingly easy. Anne went in for an office visit, had some blood drawn, and then Henry Ford processed it to separate the platelets. These platelets were then injected into Anne’s injured hamstring tendons.

“The worker cells are concentrated and focused, and they generate healing within that space in a real targeted area,” Anne says.

“I could run six weeks out,” Anne says. “It was probably eight weeks after when I felt awesome. And I average about 30 to 40 miles a week — so a good amount of pounding on the pavement.”

Anne can’t believe the dramatic change from her injury to now.

“It’s amazing to go from what we call ‘peg legs,” when your hamstring’s just not working, to having full mobility,” she says. “I can run up a hill, I can actually do a sprint. The pain’s gone, it’s just so awesome.”

Dr. Shehab is also ecstatic at Anne’s recovery. “In sports medicine, when our athletes feel good and perform well, it means we did our job well,” he says. “It means the world to us, as physicians, to see our athletes get back on track.”