From Injury to All-American

If Randy Fry’s story was a play, it would have two acts. Act One would be called Before Injury. Act Two would be After Injury. It’s a story of ambition overcoming adversity.

Fry was a walk-on freshman on Adrian College’s football team that won the 2014 Michigan Intercollegiate Athletic Association’s (MIAA) conference championship. A wide receiver and long snapper, he appeared in three games in the team’s 8-3 season without catching a pass.

It would be on the track team, however, where Fry’s athleticism shined. In his first sprint of the spring indoor season, he ran the 60 meters in 7.15 seconds, breaking the school record by one-tenth of a second. By season’s end, he had the time down to 7.05.

The early success was quite remarkable for Fry, a physics major who had won an academic scholarship to Adrian. Then came the injury that would jeopardize his burgeoning collegiate career.

That fall Fry ruptured the patellar tendon in his left knee trying to catch a pass in the Bulldogs’ football season opener. It was a severe injury for someone whose four-year athletic career at Redford’s Thurston High School was injury free. 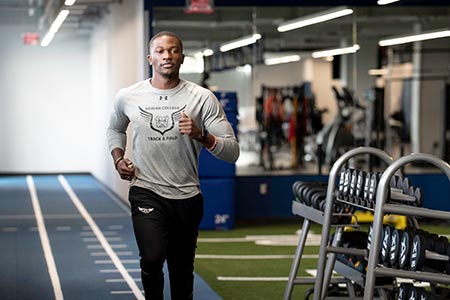 The patellar tendon holds the kneecap in place by connecting to the tibia and patella bones in the leg. When ruptured, the tendon separates from the kneecap, preventing the leg from straightening and making it difficult to walk, run and jump.

“I wasn’t thinking I was going to be done,” Fry says. “I was thinking, how am I going to get through this and return to the same athlete or even better.”

Fry underwent surgery in September 2016 at Henry Ford West Bloomfield Hospital and began rehab two weeks later. He was cleared to return to sport nine months later in June 2017. “It was a constant grind,” Fry says of his rehab. “It was harder than I expected.”

“It’s a career-threatening injury,” he says. “It’s one of the more serious knee injuries you can have.”

Fry returned for the fall 2017 football season and experienced no residual effects from the injury. The big test, though, came in the spring 2018 when he began running track again. Initially, he was timid and wary of the strength of his knee. The turning point came when he broke the indoor 60-meter record yet again at 6.9.

For the next two track seasons, Fry ran free and loose. And new accolades followed. At the conference indoor championship in February 2019, Fry set a new school record in the indoor 60 meters (6.85) and a conference record in the 200 meters (22.31). The performance earned him Most Valuable Runner honors – Adrian’s first runner in school history to do so in indoor track.

By the end of his senior season in May 2019, Fry had added multiple All-Region and All-American honors to his prolific track career. In addition to his two signature events, Fry also anchored the school’s 4 x 100 relay team. 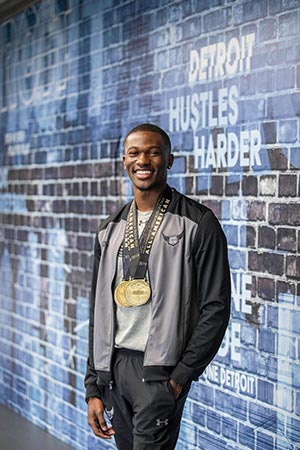 “I was so determined to show people that it’s possible not to let anything define you,” says Fry, who’s now pursuing a second undergrad degree in mechanical engineering at the University of Toledo. “It was a struggle every day (after the injury). But the joy that comes with you achieving a goal that you’ve worked so hard for – is really unmatched.”

Fry credits Dr. Moutzouros for providing invaluable support during his rehab. “He’s one of the coolest doctors I’ve ever had,” Fry says. “He was always there. Emails, calls, whatever it is. That was really helpful. He made it a lot easier moving forward.”

Dr. Moutzouros says Fry’s performances and accolades are even more remarkable because of the nature of his injury. “He’s an amazing outcome, there’s no question. We have a handful of these cases every single year in terms of athletes whose outcomes are incredibly good. Part of it is the patient, part of it, of course, is the surgery. Put them all together, in the right way, and you get Randy.”