"It makes me feel good that I was able to save someone’s life, and anyone can do this. If I had another kidney to give away, I would." 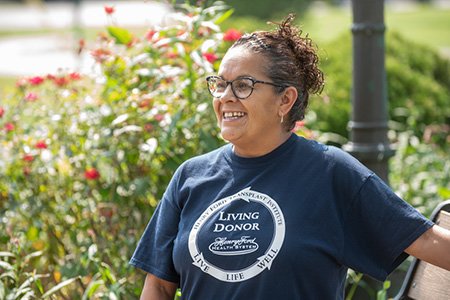 In late 2019, Jacqueline Alcorta, 54, of Toledo, Ohio, saw something on social media that would change her life. A friend of hers posted about one of her friends, Kathleen, who needed a kidney. Jacqueline didn’t know the woman but decided to see if she was a match.

Did you know about living donor transplant previously?

"No, I never imagined that I could do something like that. Can I really help save someone I don’t know? Who does that?"

What happened when you saw the post about Kathleen needing a kidney transplant?

So you decided to see if you were a living donor match?

"Yes, I contacted my friend and told her I was interested. She got me in touch with Henry Ford Hospital, and from there I connected with the transplant team. Since I live in Toledo, they sent me to a hospital here where I had my blood drawn. Two days later, I found out I was a match, but they needed to do more testing. Unfortunately, in March 2020, it all stopped when COVID-19 hit."

When did you start up again?

"In June 2020, the transplant team called me again and said they needed to continue testing because my recipient was really sick. I didn’t know Kathleen’s name at that point. We did more tests, and there were a couple of potential problem areas, but everything checked out."

How did you feel when you found out officially that you would be a living donor?

"I had a lot going on in my life and had my doubts about doing this. But Kathleen and I did have one connection, we were both born and raised in Adrian, Michigan. I thought it was interesting that we grew up in the same hometown, and I felt bad for her. She was reaching out for someone to help her, and I thought I could be that person. It’s scary, because things can go wrong, but ultimately, I decided to put it in God’s hands."

What do you remember about the procedure and initial recovery after the kidney transplant?

"It was in early September 2020. When the day came, my daughter dropped me off at the hospital. She was with me until pre-op, and then I saw her when I was in recovery. I was in the hospital for a couple of days, and during that time I made a video and posted it on social media. I also got to meet Kathleen for the first time."

How did that go?

"We talked for a few minutes, and she thanked me. She told me that I’m her angel. We keep in contact from time to time, and she’s always so grateful. I’m really happy to hear that she’s still doing well and living a great life."

As a living donor, did you need to make any lifestyle changes?

"Yes, I’m a lot healthier now. I mostly drink water and don’t drink alcohol. I was a light smoker before, more in social situations, but I quit smoking. I’m also trying to stay more active and watch my diet.."

What kind of follow-ups do you have?

"I had more frequent appointments at first, but now I go every six months. At my last one, they said my numbers are surprisingly good for someone with one kidney. All of my lifestyle changes have definitely helped."

What has your family thought about your kidney transplant?

"My mom was still alive when I decided to do this, and she gave me her blessing. I have three children, all grown, plus four grandchildren and another one on the way. Before I committed, I had all of my kids get tested, to make sure they weren’t the same blood type in case they ever needed a kidney from me. At first, my kids thought I had lost my mind doing something like this. But now, they look at me as a whole different person."

Anything else you’ve taken away from your living donor experience?

"Never in a million years would I have dreamt I would do something like this. And it was a long journey. But through all the testing, and meeting all of the different people at Henry Ford along the way, they made me feel like what I was doing was remarkable and helped keep me going. It makes me feel good that I was able to save someone’s life, and anyone can do this. If I had another kidney to give away, I would. In September 2020, Kathy Regalado, 63, of Adrian, underwent a kidney transplant to address her Stage 5 kidney failure. It was a long treatment journey, which included a large media push to help find a donor, and a selfless act by a living donor who she didn’t know."

When did you start having problems with your kidneys?

"I was having problems and didn’t realize it, because my daughter and I were taking care of my parents. My mother had pancreatic cancer, and my father was blind and paralyzed and had to be turned and tube fed, so I wasn’t thinking of myself at the time. After they passed, I started getting checkups for my symptoms, and found out I was already at Stage 5 kidney failure."

What symptoms did you have?

"Diabetes runs in my family, and I had been diabetic for several years. I was on dialysis, and when I started having vision problems I went to my eye doctor. It turned out I had diabetic retinopathy, and the bleeding behind my eyes was causing me to go blind. I started getting injections and got my eyesight back, but ultimately had to get a kidney transplant."

Did you know about living donor transplant previously?

"I knew there were different types but that’s about it. I also knew someone else who went through a kidney transplant at Henry Ford."

How did you find your living donor, Jacqueline?

"Once I started the transplant process, my daughter contacted local media and they covered my story and helped increase awareness of my need for a donor kidney. It went on the radio and on the front page of our local newspaper, the Daily Telegram. My granddaughter also had bracelets made and was selling these, and posted on Facebook, which is where Jacqueline saw it. She was a friend of a friend."

So you didn’t know Jacqueline before this?

"No. Although once we started talking, we found out that Jacqueline’s mother had stood up in my parents’ wedding. So we had a connection we didn’t know about until then."

How did you prepare for your kidney transplant?

"I just put it in God’s hands. There were some challenges after Jacqueline was selected as the donor, in part due to COVID-19. We had to stop testing for a while, and then when we started up again, she had some potential health issues and we didn’t know if she’d be able to donate. But it all worked out."

What do you remember about the living donor procedure day?

"I was in surgery for 17 hours, and I had some complications afterward. But the nurses there were priceless. They went above and beyond to make me comfortable. I was also excited when they brought me a tray with milk and tomato juice. Because I had been on dialysis, I hadn’t had these in over a year."

What is your life like now, compared to before your transplant?

"It took a while to get the medications right. I was also on steroids, which made me gain weight quickly, so I’m still working on that. My goal is to feel normal again. I’m not there yet, but I do have more energy to help take care of my 5 great-grandbabies who live with me. Before, I had to do regular 9-hour dialysis infusions at home. Now I just go in for an infusion once a month."

Do you keep in touch with your living donor?

"We talk on Facebook, and our 1-year transplant anniversary is coming up, so our families are getting together for a celebration dinner. I call her my guardian angel. Such a selfless act for someone who you don’t know."

Anything else you’ve taken away from your living donor experience?

"With the world how it is today, I was in total shock at how many people reached out to my daughter’s kidney transplant request, and who were so loving and caring to try to help a stranger. Almost a year later, I’m still getting responses."

After a long journey, Kathy Regalado of Adrian underwent a kidney transplant to address her Stage 5 kidney failure. Her living donor was a selfless stranger. Read Kathy 's story >

Speak with a Transplant Institute specialist.