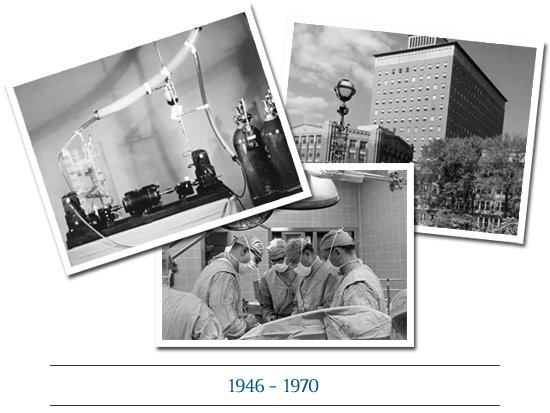 During this post-war period, Dr. Sladen recognized the development of new medical and surgical specialties, and he and Dr. McClure established several new divisions in the Department of Medicine, including Allergy, Pulmonary, Pediatric Cardiology, Rheumatology and Infectious Diseases; as well as in the Department of General Surgery, including Oral Surgery and Thoracic Surgery.

Many of the doctors found expanded opportunities for research, including the treatment of burns, anticoagulant therapy and the uses of heparin, therapy for infectious diseases and the development of new antibiotics. Other staff members were doing research in areas such as hypertension, arthritis, anoxia in anesthesia, gynecological endocrinology, and sugar metabolism. By the end of the 1940s, the staff of Henry Ford Hospital had published more than 1,000 medical articles in leading medical journals.

Patient medical record numbers had reached the half million mark by the late 1940s. Between 1922, shortly after the main hospital building opened, and 1949, the daily census of inpatients increased 60 percent while average daily outpatient visits increased by 600 percent. Makeshift arrangements had to be made to accommodate this influx.

Drs. Sladen and McClure presented a multifaceted proposal to Henry Ford II and an expanded Board of Trustees in 1946. It involved an ambitious building program which would add two stories to the main hospital, increasing the bed capacity to 800, and provide a new, multi-storied clinic building. A second proposal presented the creation of a medical board which would be responsible for medical planning and procedures. Both proposals were accepted.

However, consideration and implementation of the building program outlined in the first proposal were delayed by the death of Henry Ford on April 7, 1947. Later that month, Benson Ford took his grandfather's place as president of the Board of Trustees.

That same year a research institute was established at the hospital. Although no funding was allocated, this was the first formal recognition of the importance of research. The Board of Trustees authorized the name The Edsel B. Ford Institute (EBFl) for Medical Research on June 17, 1948.

On February 23, 1950, the hospital received a $13.6 million gift to build the proposed Clinic Building. The 17-story structure would provide a suite of 16 new operating rooms, an expanded library, pharmacy space, as well as laboratory and radiology facilities.

Later that year, Clara Ford passed away. Then, in March 1951, Dr. Roy McClure died in his sleep of cardiac failure. He had served for 35 years as chairman of the Department of Surgery and co-administrator of the hospital with Dr. Sladen.

Dr. Buerki also succeeded, within about three years, in expanding the staff with talented physicians as well as establishing several new subspecialty divisions and departments. As the medical staff grew, so did the staff of the Department of Nursing. In the fall of 1953 alone, 60 new nurses joined the staff, 40 of them graduates of the Henry Ford Hospital School of Nursing.

Dr. Buerki is recognized as the founding father of the Six Clinic Conference, a cadre of group practice clinics and hospitals whose leaders met annually to share information and experiences. The initial meeting was held in Detroit in January 1955, and included representatives from Henry Ford Hospital, Ochsner Clinic in New Orleans, and the Cleveland Clinic. In March the group met again in New Orleans, and were joined by representatives from the Mayo Clinic and Lovelace Clinic in Albuquerque, New Mexico. In November a third meeting was held in Cleveland. This one served as the first formal meeting of the group, and included members from the sixth participant, the Lahey Clinic in Boston. For 40 years representatives of the same six institutions met annually.

Physical changes continued at the hospital throughout the 1950s. Although the new clinic provided space for outpatient services, inpatient areas of the hospital remained crowded. In March 1957 a new construction project was announced. The two-story addition to the wings of the hospital, planned during the original construction more than 30 years earlier, would add 100,000 square feet of space and 250 beds to the inpatient units. The project was completed within two years.

Around the same time, the beginnings of what would eventually become Health Alliance Plan (HAP) started when UAW President Walter Reuther sought an alternative to traditional health insurance for union members. Reuther's search ended with the formation of a physician group practice and health plan that helped revolutionize the way healthcare is provided and paid for in this country. In 1958, Metropolitan Hospital in Detroit was purchased and the hospital's staff agreed to work on salaried basis rather than the traditional fee-for service arrangement, thus becoming one of Michigan's first prepaid group practices. The doctors and UAW needed a health plan to cover affordable access to medical services, so Community Health Association (CHA), opened its doors on December 1, 1960.

By 1964, Dr. Buerki was 72 years old and ready for retirement. Dr. Buerki had served Henry Ford Hospital for 14 years, leading it in an era of growth. Its physical size had been expanded and updated. Its physician and nursing staffs had been enlarged and improved. Academic stature had been enhanced and international reputation attained. In their leadership during the hospital's first 35 years, Drs. Sladen and McClure had brought it from infancy through what might be considered adolescence. Dr. Buerki led the institution to a time of maturity. In December 1964, Dr. Buerki announced the appointment of Dr. James T. Howell – who had been at the hospital since his internship in 1944 – as his successor.

In 1965, Henry Ford Hospital celebrated its fiftieth anniversary. That same year, "Medicare" was enacted, assuring broadened benefits for the aged. At the same time, additional legislation referred to as "Medicaid" expanded public medical programs for the poor. Henry Ford Hospital, like other large hospitals, found itself faced with the burden of providing adequate care to a rapidly expanding population of these patients.

The hospital’s city was suffering too. The events on July 23, 1967 triggered a disaster which would alter Henry Ford Hospital and the city of Detroit forever. A week-long riot ensued -- filled with violence, looting and more than 1,600 fires. The injured poured into the emergency rooms of neighborhood hospitals, especially at Henry Ford Hospital, which was in the vicinity of the most serious rioting. The Emergency Room handled 656 cases related to the riot in four days. Of these, almost 400 were serious trauma cases involving gunshot wounds, stabbings or other severe lacerations. The Twelfth Street area was like a combat zone, resulting in at least 44 fatalities. Constant sniper attacks continued, with Henry Ford Hospital as a target since guardsmen and tanks were bivouacked there.

In the aftermath of the riot, hospital administration praised staff and employees or their monumental and courageous efforts on behalf of the patients. However, the damage was done. Increasingly, patients became unwilling to come downtown for their care, and sought suburban hospitals and clinics instead. The Board faced serious financial losses resulting from the high number of non-reimbursed emergency room services rendered during the riot. Physician staff began to leave the hospital, their discontent with the administration exacerbated by the riot and negative situation in the city. The possibility of moving the hospital out of the city to one of the northern suburbs was considered, but the Board and the hospital's physician leadership remained committed to Detroit.

In February 1968 some members of the medical leadership began consulting with one another about their concerns and their dissatisfaction with the hospital administration. On September 20, 1968, Benson Ford asked for Dr. Howell's resignation. Dr. Buerki assumed the role of acting executive director. For the next two years Dr. Buerki again headed the hospital while the Board of Trustees conducted a search for a new leader.