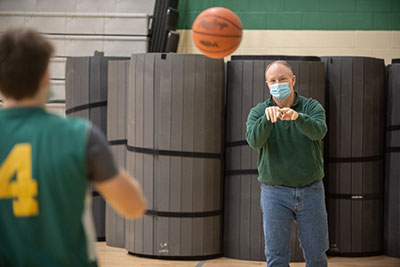 With a history of blood clots, Matthew Godfrey didn’t waste any time getting to the emergency room at Henry Ford Wyandotte Hospital when he awoke one December morning with excruciating pain above his knee.

He previously had been diagnosed with deep vein thrombosis (DVT) on his right leg and immediately knew this latest pain could be deadly serious.

“They got me right in after I told them I was a previous DVT patient,” he said. “Immediately they found that a clot had traveled to my groin area.” A CT scan then revealed pulmonary embolism in both of his lungs.

Cardiologist Qaiser Shafiq, M.D. told the 50-year-old father of three boys that he needed an immediate procedure. “He told me I was in bad shape, and I started to realize how serious this was,” Matthew said. “At that point, I was kind of in a panic, but Dr. Shafiq was very relaxed and calm. That made me feel better.”

The Flat Rock resident was one of the first patients to undergo EKOS therapy at Henry Ford Wyandotte after two massive clots were discovered in his lungs. With the Ekosonic Endovascular System (EKOS), targeted drug therapy and ultrasound are delivered simultaneously through a catheter, which is equipped with ultrasound ports and inserted into the clot. Ultrasound energy is used to spray the clot-busting medication. The procedure takes about 10 to 15 minutes after which the patient goes to the ICU for six to 10 hours.

For patients diagnosed with massive or sub-massive clots in the lung, EKOS has successfully eliminated clots in hours instead of days using less than one-fourth the amount of medication. Previously, the only option was to deliver clot-dissolving medication through an IV that not only went to the lungs but also other organs, increasing the risk of bleeding. EKOS delivers targeted therapy to the clots, avoiding other bleeding risks.

“They told me about the new EKOS procedure and I was very glad to be one of the first patients, especially when they said the other option was not as good,” Matthew said. “I gained a sense of trust through Dr. Shafiq’s calm explanation.”

In less than 30 minutes, Matthew was out of the catheterization lab and in the ICU where the EKOS catheter broke up the clots in a matter of hours. He was home by mid-afternoon the following day.
“Between the Lord upstairs, the new technology and having the right doctor on call, it put me back to just about 100 percent really quick,” he said. “With more research I did after the fact, I realized I could’ve been in the ICU for a few weeks with a lot more risk if I had it done the old-fashioned way.”

Matthew also was diagnosed with May-Thurner syndrome, a rarely diagnosed condition that affects blood flow in two blood vessels going to the legs, making those affected more susceptible to massive clotting. Dr. Shafiq performed a venous thrombectomy to remove clots from Matthew’s knee to his pelvis. A stent also was inserted into a vein in Matthew’s leg to improve blood flow.

He said he’s extremely grateful for the advanced, lifesaving care he received at Henry Ford Wyandotte Hospital. “It’s a partnership that I’ll remember forever,” he said. “I couldn’t have had better care. While I was in a bad condition, I would never have wanted it to be done anywhere else. Everyone from the people who gave me the tests to the nurses and doctors could not have been kinder and more compassionate.”

Now he looks forward to returning to his assistant coaching role for the boys’ varsity basketball team at Flat Rock High School.

“My lungs are markedly improved and clear,” he said. “Soon I’ll be able to get off blood thinners and be a normal human being. I’ve had a lot of people tell me that it was meant for me to still be here.”