Liz Dale beat the odds against an invasive blood cancer 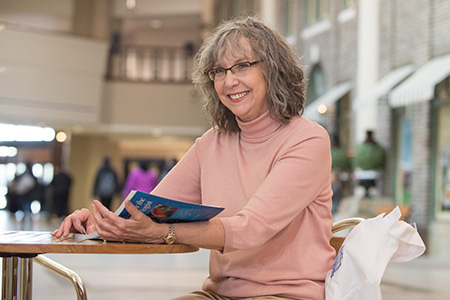 The symptoms mimicked those of menopause. But the associated pain in Liz Dale’s legs, lower back and groin were so intense – some days ratcheting up to a 10 on the pain scale – that she knew it had to be something else.

“It started on the first Friday of Lent in 2014,” she recalls. “My friend and I had decided to do the Stations of the Cross, and so there was a lot of standing and kneeling. I felt very sore and was having trouble standing up.”

When the pain began to impact her work, making it difficult for her to stand or sit, Liz decided to take action.

She received the results before Easter. The test suggested that Liz either had leukemia, lymphoma or multiple myeloma.

On the morning of Easter Sunday, her internist called to inform her that Philip Kuriakose, M.D., senior staff hematologist at Henry Ford Hospital, would contact her that evening.  He did and scheduled an appointment the following morning in the oncology clinic for more tests, including PET and biopsy.

Those tests revealed that Liz had a highly malignant and invasive form of hematopoietic cancer called non-Hodgkin’s diffuse large B-cell “double hit” lymphoma, and it was stage 4. This type of blood cancer is named “double hit” because of the presence of two adverse gene markers, which make it very aggressive and difficult to treat.

“These high-grade lymphomas typically aren’t picked up by a general exam; instead, they tend to announce their presence suddenly with night sweats, fatigue, unexplained weight loss, possible pain in affected lymph nodes, and are diagnosed with a biopsy,” says Dr. Kuriakose.

Diffuse large b-cell lymphoma defines how the cells appear under the microscope.

“Up to 60 percent of standard cases can be cured. However, once you look at the underlying prognostic markers, including genetic make-up of the cancerous cells, you could encounter a bad gene mutation(s), making the disease less responsive to therapy and lowering the likelihood of surviving the disease; we typically see 18 months of survival for diffuse large b-cell with such mutations,” says Dr. Kuriakose.

Liz was admitted to the hospital that week to begin treatment.

Because this type of cancer is rare and not adequately studied, Dr. Kuriakose says there are no clear guidelines in place for treatment.

So Liz’s multidisciplinary cancer team of hematologists, medical oncologists, pathologists, advanced practice providers, social workers and nurses devised a treatment plan that would first aim to treat her with intense chemotherapy for the high-grade lymphoma, and then, based on her results, potentially a bone marrow transplant.

Treatment began with high-dose chemotherapy, including spinal chemotherapy, requiring a four- to five-day hospital stay each month for 10 months. The team prescribed 8 different types of chemotherapy agents to kill the cancer cells.

“Liz went into complete remission after half of the chemotherapy cycles that were recommended, so that was a good sign,” says Dr. Kuriakose.

But going into a complete remission doesn’t mean you’re cured.

“It’s like sweeping the dirt under the carpet and having people over and they say ‘your house is so clean.’ But you know it’s still there. The only path to a cure for Liz’s cancer was a bone marrow transplant,” says Dr. Kuriakose.

In January 2015, Liz was notified that a bone marrow donor had been found.

“I encourage anyone to get all of the support that is offered – meals, transportation, house cleaning and prayer.

The bone marrow transplant did come with complications. Liz was diagnosed with graft versus host disease, a condition that may occur after an allogeneic transplant, where the donated bone marrow cells view the recipient's body as foreign, and they then attack the patient’s body.

Liz was in hospital for another three months and then required rehabilitation to get back some of her daily function.

“Dr. Kuriakose would never tell me my chances for survival,” Liz says. “But I remember asking my transplant oncologist, Dr. Nalini Janakiraman, after my bone marrow transplant, ‘how much longer do I have?’”

Liz was told that through her multidisciplinary care at Henry Ford, she is not only in remission - she in fact is cured, beating all of the odds.

Liz’s advice to other patients

“When I was diagnosed, my boys were in college and I didn’t want to burden them, but just having them visit me two to three times a week was great. I relied on just close friends and neighbors to help me. I encourage anyone to get all of the support that is offered – meals, transportation, house cleaning and prayer. Stay positive; there’s always hope.”