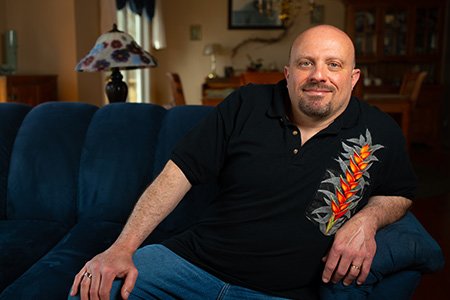 Alfio’s legs had swelled up so bad at work he couldn’t walk.

Then came a rush trip to the ER. Then several procedures to try to remove a blood clot. And finally a referral and ambulance trip to Henry Ford Hospital. It was a whirlwind week for Highland resident and Fiat Chrysler Automobiles electrician Alfio Reitano, and it was just the beginning of what would turn out to be a complex treatment journey.

When Alfio got to Henry Ford, he met with vascular surgeon Dr. Loay Kabbani, who explained that he and a colleague, interventional radiologist Dr. Scott Schwartz were going to suction out the blood clot through Alfio’s neck using a new device called an AngioVac.

The clot was large, and had spread throughout Alfio’s legs and upper body. One critical issue was that his inferior vena cava (IVC), the large vessel that feeds blood to the heart, had become blocked. During the AngioVac procedure, the surgical team suctioned out a large piece of the clot in multiple bits, and at the same time placed a stent in his IVC to help keep it open.

The procedure was successful, but Alfio’s blood kept clotting, and the Henry Ford team dug deeper, starting with the clot tissue itself. They had noticed something abnormal during the procedure and sent the tissue out for testing.

“When the results came back, I got the news,” Alfio says. “I had a rare type of vascular tumor. You never want to hear you have cancer. But a rare form? That’s even worse. I didn’t know what was going to happen.”

The tumor, which the team identified as an epithelioid hemangioendothelioma, was so rare that it affects less than one in a million each year. It had started in Alfio’s abdomen and grown into his IVC.

For Alfio, the next several weeks passed in a blur. He met with oncologist Dr. Mona Vekaria to discuss his treatment plan. He was put on special blood thinners to help minimize the formation of clots. He underwent several additional procedures, including one to create a temporary fistula in his leg (splicing the artery and vein together to create a stronger blood flow and help prevent blood from pooling and clotting).

“No matter what they did, the cancer kept causing my blood to clot,” Alfio says. “They needed to remove the tumor, but I had been in the hospital for so long and underwent so many procedures at this point that they sent me home to get strong first.” 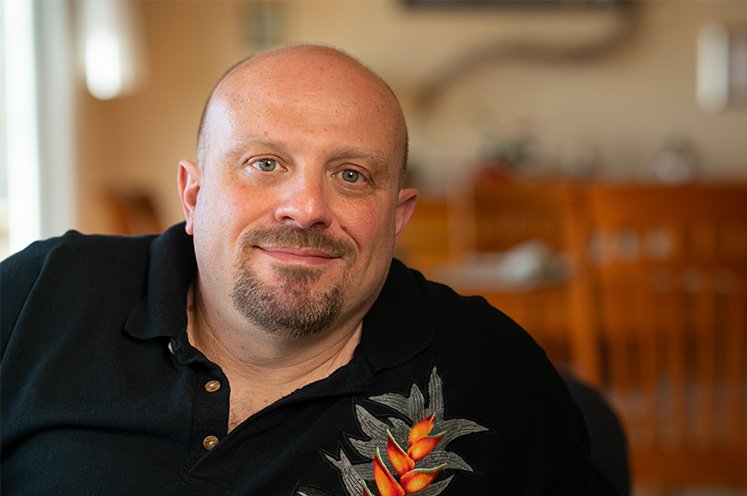 When his legs swelled up so bad he couldn’t walk, Alfio was referred to Henry Ford for what would be a long care journey, including lifesaving treatment at Henry Ford Hospital.

Alfio went home around Thanksgiving, and returned to Henry Ford Hospital early in the new year for an extensive open surgery performed by a team of vascular surgeons led by Dr. Kabbani and oncologic surgeons led by Dr. David Kwon. The complex procedure involved two parts: first of all removing the tumor from Alfio’s IVC, then reconstructing the wall of this large vessel using an artificial graft.

The surgery was a success, but other tests during his initial diagnosis revealed that Alfio had two inherited blood clotting factors (Factor V Leiden and lupus anticoagulant). This meant that he would battle clotting issues for the rest of his life.

In fact, a few years after his tumor removal, these clotting issues had caused nerve and vascular damage in his leg veins. His veins weren’t getting the proper amount of blood flow, and Alfio started experiencing some fatigue and leg pain. Dr. Kabbani and Dr. Schwartz suggested that he have several stents placed in the leg veins to increase the flow.

“It went well, and in a couple of days I felt a lot better,” Alfio says.

Getting the most out of life

It’s been several years since Alfio’s tumor removal, and while he has periodic follow-ups with his oncologist, his cancer hasn’t returned. Given his blood clotting conditions, Alfio also still sees Dr. Kabbani for leg swelling and to help manage clotting.

He’s grateful for all of the efforts by the Henry Ford team to give him the highest quality of life possible.

“Even with the stents, my leg’s only about 80 percent of what it used to be, and I have to wear compression socks to help keep my blood from pooling and clotting,” Alfio says. “But it could be so much worse. I know my case wasn’t easy, and Henry Ford never gave up on me. They care about me, and have treated me very well, throughout the whole process. I can’t thank them enough.”