Donnell Hollister knows about changing games for his livelihood. He has been a music therapy intern, a psychiatric childcare provider, a photographer, and an expert of sorts who sells Oriental rugs for Macy’s. When he was diagnosed with prostate cancer, Donnell would meet expert urologists, Wooju Jeong, M.D., and Craig G. Rogers, M.D., who would be the ultimate game changers for Donnell’s recovery.

In 2014, diverticulitis caused a rupture in Donnell’s colon, and he temporarily needed a colostomy bag. His colon was reconnected four months later, but the surgeries caused extensive abdominal scarring.

Still, the scarring and a hernia didn’t stop him from doing what he enjoyed most — scuba diving in lakes, quarries and the ocean.

Kayaking was on his to-do-fun list in July 2021 when he had a routine prostate-specific antigen (PSA) blood test. It showed unusually high proteins produced by the prostate gland. The biopsy detected stage 2 cancer. Dr. Jeong called Donnell with options — radiation treatment, precision prostatectomy or a total prostatectomy. 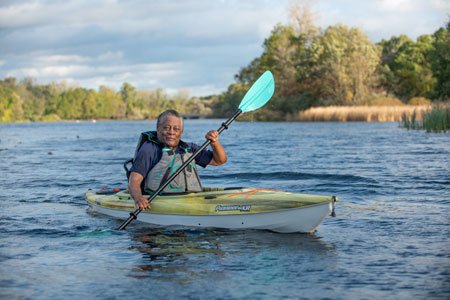 “I preferred the total surgery to reduce the chances of cancer hiding in the seminal tract,” says Donnell.

Even when there is severe scarring, says Dr. Jeong, approaching the prostate gland through the belly can be successful. Also, this approach can spare the bladder and prevent urinary control issues after surgery.

Two weeks later, a highly experienced Dr. Jeong made three small incisions and began a traditional multiport robotic prostatectomy. However, the excessive abdominal scar tissue prevented access to the prostate, making it impossible for the surgery to proceed.

“I was a little depressed. I had pushed myself for the surgery and then it couldn’t be done. Also, being out of work was depressing,” says Donnell who is single and 65. During his recovery, Donnell’s sister and neighbors were there to help. “But soon Dr. Jeong called me with a game plan for a second surgery in two weeks, and that was uplifting.”

The plan would involve using a single-port robot and a transvesical technique. That meant making one small incision and moving the robotic instruments directly through Donnell’s bladder to remove the prostate gland and avoid the scar tissue in Donnell’s abdomen, says Dr. Rogers, chair of the Department of Urology.

“The single port robot turned a ‘nonsurgical’ patient into a surgical one,” says Rogers, who performed the first transvesical prostatectomy at Henry Ford Hospital and used that surgery as a model, alongside Dr. Jeong, to offer Donnell a promising treatment option.

Since the surgery, Donnell is progressing and working to improve urine control. Doing at least 50 Kegels, or pelvic floor exercises, each day is strengthening his muscles.

“This is just what I have to do before I feel comfortable going back to work,” says Donnell from his two-story home in westside Detroit. His photographs line the walls, and his library is filled with college books and science fiction. “I’m patient and know things will resolve themselves. I’m able to see things through by doing a step-by-step progression.”

It’s an ability he learned during the 18 years he taught life skills to kids and worked as a psychiatric childcare worker. During these years, he played French horn in the Topeka Symphony Orchestra and later he had a chair with the Wichita Symphony. But his career plans changed when he returned to Detroit to care for his mom who suffered with dementia.

“Routine has saved me,” says Donnell. He stays at home in the morning. Then he goes to Fairlane Mall to use the internet. Later at Belle Isle, Donnell eats, walks, visits the horticulture conservatory or watches the international freighters. “You can’t just sit at home all day. You have to keep busy and have some variety.” 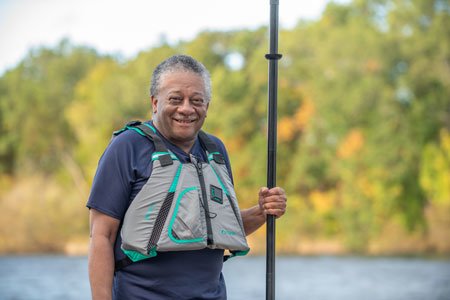 “Dr. Jeong is the perfect doctor. He knows I’m very concerned and says it will take some time to get through this,” says Donnell. “He’s very thorough. He even explained that the GoodRx website can find the lowest price for medication.”

Donnell will continue to have PSA tests every three months for the next two years. Then every six months for five years. After that, “I can get the cancer survivor merit badge,” he laughs.

Donnell advises men to get the PSA test and if necessary, see a specialist at Henry Ford. “I trust Henry Ford and I recommend them.”

His plans for the future: Get back to work, save money and get his boat back in the water. 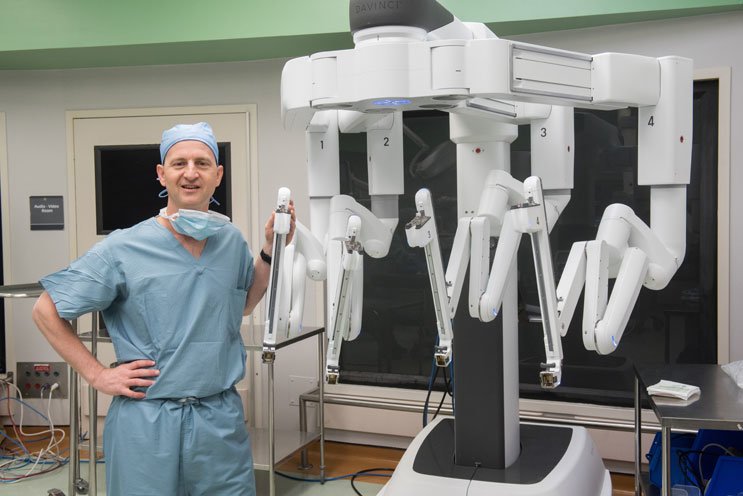