Approximately half of patients treated for brain tumors experience tumor recurrence within a year. That is a scary statistic. But we’re hopeful that a new technology called surgically targeted radiation therapy will change that. The FDA-cleared treatment (known as GammaTile) has been shown to delay—or prevent—tumor cells from replicating and forming a recurrent tumor, as it targets residual tumor cells with radiation before they can significantly replicate.

How does it work?

Historically, standard-of-care treatment for metastatic brain tumors (or brain tumors that travel to the brain from other parts of the body) has involved surgery, and then within several weeks, as many as 10 visits for conventional radiation. With surgically targeted radiation, treatment occurs directly after tumor removal.

Radiation is embedded into a collagen sponge, encapsulated in titanium and placed into the brain right after you’ve had surgery to remove a brain tumor. The radiation immediately starts treating the area next to where the tumor was removed, which is where most recurrences happen. On average, placement of the radiation capsule takes approximately five minutes.

You’ll receive 90% of the radiation within 33 days. After 100 days, you’ll have received all of the radiation. For the first few weeks, it’s recommended not to ride on public transportation, sleep in the same bed as anyone else or get close to pregnant women. There are very few other limitations.

What are the benefits of surgically targeted radiation therapy?

Surgically targeted radiation therapy has several benefits, such as: 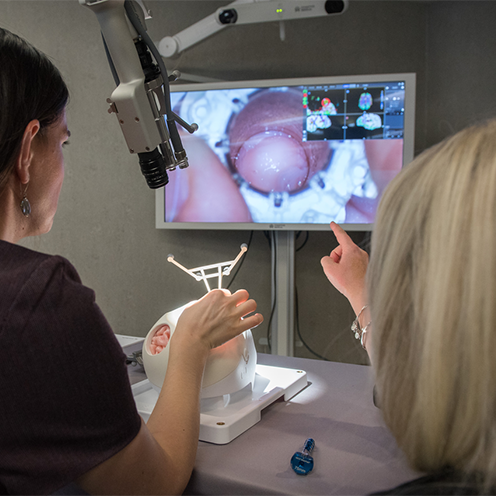 Our experts highlight the newest treatments for brain tumors.

Learn More
Brain Tumors Clinical Trials
Discover hundreds of clinical trials for brain tumor cancer.
Cancer Support Services
Emotional, physical and spiritual services help guide your treatment and recovery.
Make a gift
We are thankful for the donors who invest in the Hermelin Brain Tumor Center through their support for patients, leading-edge treatments, facilities and research to better understand and cure brain tumors.
24 hour appointment guarantee
Call us at (888) 777-4167
Request an Appointment
X