Desirae Martinez was a healthy, pregnant 37-year-old who never had any problems. Until right before her heart attack. 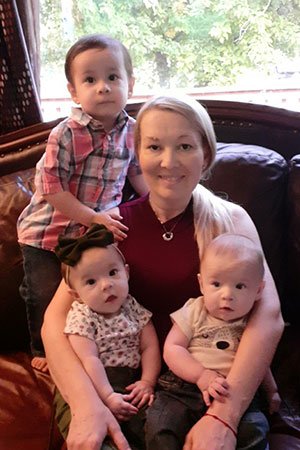 “I don’t have any history of heart issues,” says the Lincoln Park resident, who was about 20 weeks pregnant with fraternal twins at the time. “Some family history, but this is more due to lifestyle issues.”

This was also Desirae’s fourth pregnancy, so she was no stranger to feeling related aches and pains. But still, something didn’t feel right. She wasn’t sure if it was the twin pregnancy, but she got tired easily, and was feeling exhausted.

“A couple of different times, I felt pain in both of my arms at the same time, almost like a restless leg feeling in my arms, but didn't think anything of it,” Desirae says. “The last time it happened, my husband was at work and I was home with the kids and felt like something was off. I’m anemic, so I thought it was just low iron, but we still wanted to get it checked out.”

From checkup to emergency

Her husband drove her to the Henry Ford Wyandotte Hospital ER. They drew blood, took an EKG and it came back fine. But while she was waiting, she experienced another bout of pain in both arms and then had pain in the middle of her back. Her husband insisted on another EKG, so they did a second test.

“The nurse looked at the printout, ripped off the paper and took off running,” Desirae says. “They quickly moved me to a trauma room, and a team of doctors and nurses rushed in and began giving me medication. Normally I suffer from anxiety and panic attack issues, but I was so calm during it all, because I was getting answers from my team.”

They told Desirae she was having a heart attack, and an echocardiogram revealed a problem with the heart muscle function in the front of her heart. In pregnant women, this can sometimes occur because of a blood clot in the heart’s arteries.

“They believed the blood clot was due to hormones from the pregnancy,” Desirae says. “I was shocked, and just thought my symptoms were related to the pregnancy itself. I had the thought, ‘what if I hadn’t gotten this checked out?’ I think it’s a mom thing, you always put your kids first, not yourself.”

The Wyandotte team rushed her to the cardiac catheterization lab to take pictures of her heart arteries, and then placed a stent in Desirae’s blocked artery. Given the lack of blood flow to her heart’s muscles, she experienced heart failure and was transferred to Henry Ford Hospital for additional treatment.

A team of specialists

Once at Henry Ford Hospital, Desirae and her family met with a team of experts to discuss treatment for her heart failure and what was now a high-risk pregnancy.

For the remainder of her pregnancy she was managed by Henry Ford’s Maternal Critical Care Conference (MCCC), a team of obstetricians, gynecologists, maternal fetal medicine specialists, cardiologists and anesthesiologists. Gregory Goyert, M.D., a maternal fetal medicine specialist, coordinated her care through the MCCC to ensure a safe delivery plan for both Desirae and her babies.

“I was already a patient at Henry Ford and my obstetrician was there, so it was good to have everyone in the same place, all on the same page,” Desirae says. “They started shifting me over to all high-risk specialists and began working on my care plan.”

Desirae also met with the Henry Ford Women’s Heart Center team, which is focused on providing life-changing support to women with heart disease or cardiovascular risk factors, including timely care for pregnant women with heart disease. She had several cardiology clinic visits during the remainder of her pregnancy and developed a close relationship with Chelsea Schesnuck, RN, who spent many hours on the phone with Desirae making medication adjustments and coordinating her testing and office visits.

All eyes on the delivery

Just before Christmas, Desirae was admitted to Henry Ford Hospital to begin a special IV medication that would keep her stent open during her planned Cesarean section. She was closely monitored for five days on this medication. While the delivery went well, she experienced some postpartum hemorrhaging.

“I had a seizure, which worried my husband, since our 17-year-old son has epilepsy and we know how serious a seizure can be,” Desirae says. “My blood pressure and hemoglobin dropped really low, I went into shock from the loss of blood and I then needed to have several blood transfusions. At one point prior to the seizure, I told them I couldn’t see anything.”

The team performed a CT scan of her head and neck to check for issues with the epidural and spinal column, but there were no neurological issues.

Going home to her family

Desirae was in the intensive care unit for three days after her delivery.

“My ICU nurses, Nicole and Abby, were amazing,” Desirae says. “I actually cried when they moved me back down to postpartum! They took such good care of me and were so loving and compassionate.”

“It was tough on my husband, since he had to go back and forth to take care of our two-year-old son when I was in the ICU,” Desirae says. “But the team in the ICU was great, they took such good care of me.”

Besides the twins and the two-year-old, she and her husband also have two teenage boys.

“The older boys were such a big help during all of this and I don't know what I would have done without them,” Desirae says. 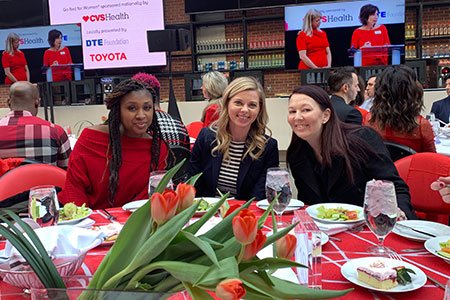 Since her whirlwind, high-risk pregnancy, Desirae has had some time to reflect on the experience. She was also asked by the Women’s Heart Center team to attend a Go Red for Women awareness event, so that she could share her story of being a female heart disease survivor and help other women be proactive about their heart health.

“You should never second guess anything,” Desirae says. “Don’t ignore it, don’t put anything off, if you feel like something’s not right or feel like you need to get checked out, do it. This is the last thing I would have thought would happen to me. God definitely has a purpose for me. If not, I wouldn’t have made it.”