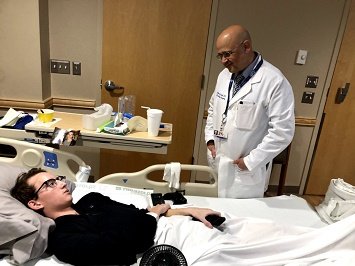 DETROIT – The teen who had a double lung transplant after a vaping-related injury is sharing his story in hopes to inspire others – particularly teens – to stop vaping and seek alternatives for a healthier and happier life.

Daniel Ament was 16 years old when Henry Ford Health System Cardio-thoracic surgeon Dr. Hassan Nemeh and his team at the Henry Ford Transplant Institute performed the transplant on Oct. 15, 2019 at Henry Ford Hospital in Detroit. It is thought to be the first double lung transplant in the world for a patient suffering what the U.S. Centers for Disease Control and Prevention calls EVALI, or E-cigarette or vaping-associated lung injury.

Today, Daniel is committed to sharing his story publicly and launching www.Fight4Wellness.com, a non-profit organization that will encourage young people to live a healthier and happier lifestyle and improve overall mental wellness with training for counselors, coaches and parents to provide alternatives for coping with the pressures of being a teenager void of substances. He made his first public appearance with Dr. Nemeh on Jan. 30 at a Vaping Town Hall hosted by The Family Center of Grosse Pointe/Harper Woods, the Grosse Pointe Public School System, the Healthy Grosse Pointe/Harper Woods Coalition and CARE of Southeastern Michigan.

“It is my mission to use my life-changing experience to educate people about the dangers of vaping and other substance abuse and to improve overall mental wellness through providing ways to cope with the pressures of being a teenager,” he said.

Daniel was admitted to Ascension St. John Hospital in Detroit on Sept. 5, 2019 with pneumonia-like symptoms. But his condition quickly deteriorated, his lungs filling with fluid and dead tissue. He was transferred to the Children's Hospital of Michigan on Sept. 17, where he was hooked up to an ECMO (Extracorporeal membrane oxygenation) device to keep him alive.  This vital piece of technology is a long-term heart/lung machine, similar to what is used during open heart surgery. It can provide partial or total support for the heart or lungs – providing time for the organs to rest and heal, if possible, or the patient to undergo a life-saving transplant.

Daniel, a healthy varsity swimmer who ran cross country and track at Grosse Pointe North High School, continued to get worse. Doctors contacted Dr. Lisa Allenspach, pulmonologist and the Medical Director of Henry Ford’s Lung Transplant Program, to see if he would be a candidate for a lung transplant. Henry Ford Health System is also a Midwest referral center for ECMO therapy.

“At that point, he was so sick that he wouldn’t live without a lung transplant,” Dr. Allenspach said. “It was his only hope. And because he was so young, we wanted to give him a chance to survive."

Daniel was transferred to Henry Ford Hospital, where he was evaluated and placed on the Organ Transplant Waiting List on Oct. 8, 2019. The lung damage due to vaping was so severe – and he was so close to death – that he immediately shot to the top of the transplant waiting list. He ultimately underwent a successful, six-hour transplant on Oct. 15, 2019. He turned 17 while still in the hospital, and doctors announced his successful transplant on Nov. 12, the day he is pictured with Dr. Nemeh. Daniel was released from Henry Ford Hospital a few days later.

“After his surgery, we discussed how he could be a beacon of change for others,” said Dr. Nemeh, who performed the transplant with surgeons Dr. Themistokles Chamogeorgakis and Dr. Diazo Tanaka, along with a team of experts in Detroit. “As I have said from the start, vaping is an absolute evil that should be stopped. Daniel’s bravery coming forward to use his story to show why others should quit vaping should be commended.”

Since then, Daniel has worked hard at pulmonary rehabilitation with Henry Ford Health System specialists to regain his strength and heal. He will continue to take anti-rejection medication for the rest of his life.

According to the U.S Centers for Disease Control and Prevention, the number of emergency room visits due to EVALI peaked in September. As word of injuries became public, including Daniel’s EVALI-related transplant in November, those numbers have started to drop. As of January 14, 2020, a total of 2,668 hospitalized EVALI cases had been reported to CDC and there have been 60 deaths. Median patient age was 24 years, and 66% were male. Overall, 82% of EVALI patients reported using any tetrahydrocannabinol (THC)-containing e-cigarette, or vaping, product (including 33% with exclusive THC-containing product use), and 57% of EVALI patients reported using any nicotine-containing product (including 14% with exclusive nicotine-containing product use).

Daniel is promoting a #justdoitfordaniel campaign to inspire others to quit vaping. He is working with CARE of Southeast Michigan and The Family Center to offer resources to those who need help quitting.  Additional resources can be found at: