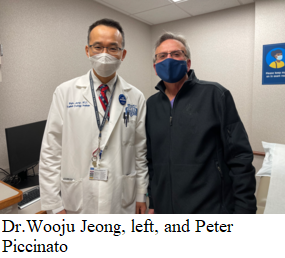 The procedure requires one small incision and provides the surgeon greater control in narrow surgical spaces.

Precision prostatectomy is a novel surgical approach that allows removal of the cancer while preserving a portion of the prostate capsule in select men in order to improve functional outcomes, such as erectile function and urinary control, compared to traditional prostatectomy. While previous patients have had surgery with a single port robotic surgical system, surgery through the bladder, or a precision prostatectomy, this marked the first time a patient has received the combination of all three at once.

Precision prostatectomy was developed at Henry Ford by robotic surgery pioneer Mani Menon, M.D., and the VUI team using rigorous clinical trial methodology. The development of the procedure has been published in several journals, including in European Urology in December 2021, and was presented at the 2021 Annual Meeting of the American Urological Association in September.

“The concept of precision prostatectomy is similar to that of lumpectomy for breast cancer, in which only the cancerous tumor is removed,” said Craig Rogers, M.D., Chair of the VUI who performed the procedure with Wooju Jeong, M.D., Senior Staff Physician in the VUI and one of the lead surgeons in the recently published study. Precision prostatectomy helps protect nerves that run in the capsule of the prostate by preserving a thin rim of prostatic capsule on the uninvolved side of the prostate. The rest of the prostate containing the dominant cancer lesion is removed in the traditional manner with the prostate capsule.

“The thin rim of noncancerous tissue that remains helps minimize the side effects of whole-gland surgery or other treatments in select men with localized tumors,” Dr. Rogers said.

For Peter Piccinato, 72, precision prostatectomy offered exactly what he was seeking – an effective prostate cancer treatment option with minimal impact on his quality of life. This precision prostatectomy procedure was completed through a small incision in the bladder, known as a transvesical approach, using the da Vinci® Single Port Robotic Surgical System, which allowed the surgery to be done while avoiding scar tissue from prior hernia repairs.

“I just completed a 5K on November 13, and I’ll be hitting the golf course in Florida again soon, too,” said Piccinato. “When Dr. Rogers explained the precision prostatectomy to me, I knew that was the option I wanted to pursue – something that would have minimal impact on my quality of life. Now more than two months post-surgery, I’m very happy with the outcome and grateful to Dr. Rogers and his team.”

During his annual physical, it was discovered that Piccinato had an elevated level of Prostate-Specific Antigen, or PSA, which is determined through a blood test used primarily to screen for prostate cancer. The next step was to take a biopsy of his prostate, which confirmed his prostate cancer diagnosis.

Under the care of Dr. Rogers and his team, Piccinato underwent the procedure on Sept. 29 at Henry Ford Hospital and was discharged the next day. Four weeks after the procedure, Piccinato – a grandfather to two grandsons, 8 and 10 years old – was back to the active lifestyle he has enjoyed his entire life.

Today, Piccinato is back to exercising regularly and doing the hobbies he enjoys. Like all patients who undergo Precision Prostatectomy, Piccinato has regular follow up appointments with his clinical team to monitor the long-term success of his procedure.

“I’m hyperactive, I feel like I need to be doing something all the time,” Piccinato said. “I really enjoy being active and playing ball with my grandsons. I didn’t have grandparents growing up, so it’s important for me to be the best grandfather I can for them.”

To learn more about precision prostatectomy or to request an appointment with a Henry Ford prostate cancer expert, visit henryford.com/prostatecancer.